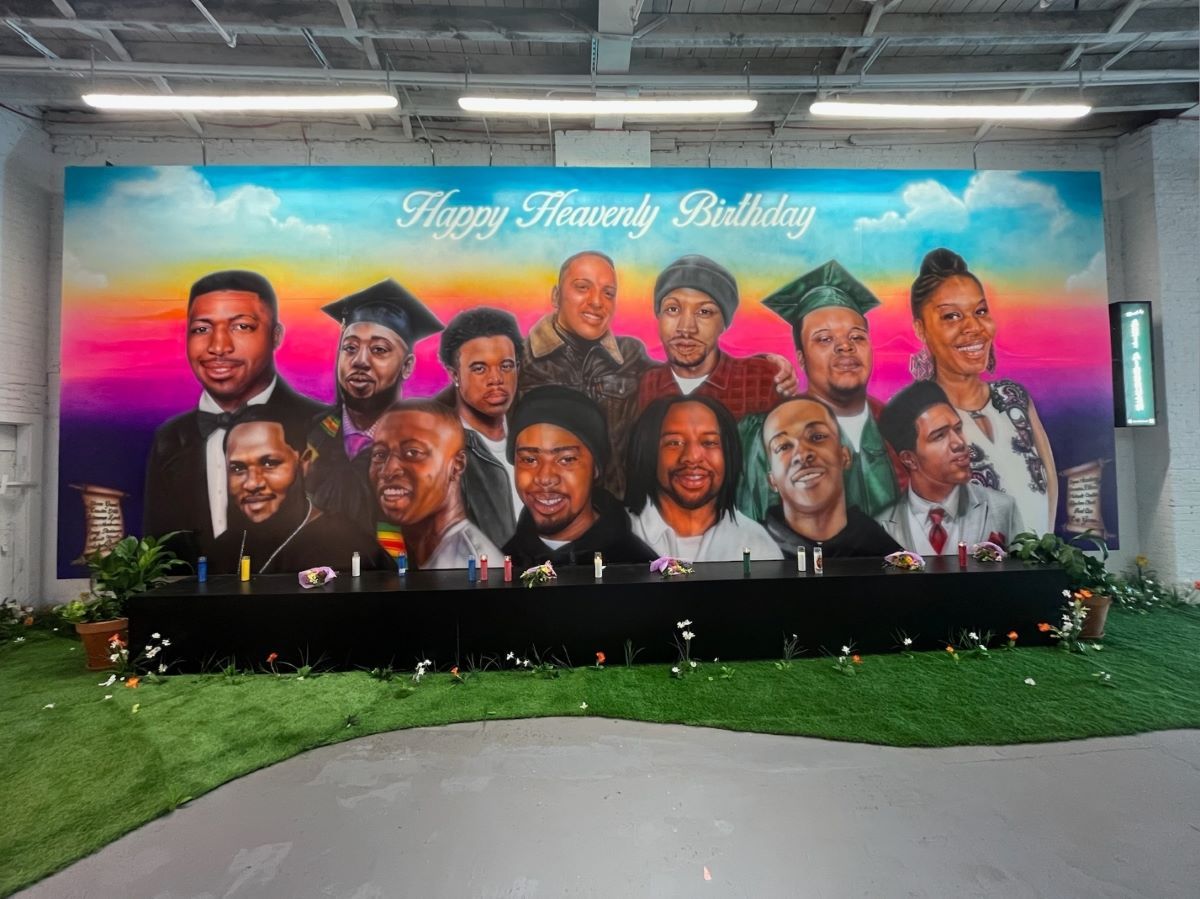 Airbrush artist Art-1, a Bedford-Stuyvesant legend, is behind the centerpiece mural of 1-800 HAPPY BIRTHDAY, an exhibit honoring those lost to police brutality. Art-1's work has been seen from MTV Cribs to Smif-N-Wessun and Missy Elliott videos, but this exhibit could be his most powerful yet.

Kenya Lawton, AKA Art-1, is an airbrush artist from Bedford-Stuyvesant (Bed-Stuy), Brooklyn. His newest mural debuted in Brooklyn this September. Happy Heavenly Birthday serves as part of a larger project titled 1-800 HAPPY BIRTHDAY honoring lives lost to police brutality, an issue that hits close to home for the artist.

Art-1 was 15 when a local video store owner commissioned him and two friends, Flair and D.D., to paint a mural in honor of a Bed-Stuy community member who had passed away. The mural would read, “In loving memory.” As young members of the community, the trio took the project seriously and scraped together money to buy proper airbrushes and paint.

“We’re all hyped up, we’re all having fun because these are the first murals that we actually are able to get paid from,” Art-1 said. “All of a sudden, you hear a cop car, you hear the siren, and they come out of the car guns drawn.”

Art-1 and his friends had been detailing the portrait in broad daylight while the video store was open when police targeted them.

“They told us to drop your airbrushes, drop what's in your hand and get on the wall,” Art-1 said. “We just felt like criminals, man. And it was saddening, it really just took us out of the zone, we were so angry, we felt violated.”

Despite this incident, Art-1 continued to paint. “We’re celebrating 30 years of airbrushing coming up,” he said. “So many award shows, videos, movies, books, just everything. My art has been everywhere.”

As the artist’s style has evolved in the past three decades, he’s been involved in many mediums. His portrait of rapper Tek-N-Steele, from the hip hop group Smif-N-Wessun, was featured in the duo’s “Sound Bwoy Bureill” music video. Working in the fashion world, Art-1 has created attention-grabbing items such as a tricked-out jean jacket for singer Ginuwine that allegedly “shut down part of Springfield Mall in Virginia.” Custom statement pieces have popped up on Keisha Cole and Missy Elliott in the “Let It Go” video, and were worn by Sharaya J in “BANJI” and “Smash Up the Place.” He painted over 20 murals in Elliott’s New Jersey home that were featured on MTV Cribs.

One of Art-1’s most recognizable, and personally meaningful, murals is his tribute to hip hop icon Jam Master Jay of Run-DMC. Located on 205th Street in Hollis, Queens, the piece was completed “in front of mourners and despondent family members” not long after the rap legend’s 2002 shooting. The mural has been seen all over the world, showcased on media including ESPN’s 30 for 30, BET’s The Murder Inc. Story, and Netflix’s Hip Hop Evolution. In September 2022, Art-1 unveiled his plans to expand the Jam Master Jay tribute, which he has been restoring every five years, with new art covering the rest of the wall. Supporters can find more information about the project on the creator’s GoFundMe.

The airbrush artist’s most recent mural, Happy Heavenly Birthday, can be found at WORTHLESSSTUDIOS’ large-scale exhibition in Brooklyn, New York. The 12-by-32-foot mural is the centerpiece of the exhibit 1-800 HAPPY BIRTHDAY, created by writer and filmmaker Mohammad Gorjestani. Beginning as a series of acclaimed short films and now transitioning to a physical expansion, the project honors those who have lost their lives to police brutality and systemic racism by providing a space to celebrate the victims’ birthdays.

When Gorjestani needed a muralist for his exhibit, he reached out to Art-1.

Art-1 said, “He told me that idea and I just immediately knew I wanted to do it.”

“It brings a real warmth to the room,” Art-1 noted of the piece. “It just kind of anchors the whole exhibit.”

After examining the mural, visitors can take in the rest of 1-800 HAPPY BIRTHDAY. The exhibit is designed to resemble a neighborhood with functioning payphones, benches, and a newsstand. Family and friends can use the payphones to leave happy birthday voicemails for their deceased loved ones. Visitors can purchase items from the exhibit’s makeshift bodega such as flowers, birthday cards, and candles to adorn the memorials. A living room space adjacent to the main area allows guests to reflect on what they’ve experienced, and provides resources for healing, as well as actions to take to prevent further police brutality and racial injustice. All proceeds from the exhibit are to be split evenly among the victims’ families.

“I’m happy to know, the families can get closure when they see the mural,” Art-1 commented. “My main objective for the mural was to have the families feel a little bit closer to their loved ones when viewing their portraits.”

Mario Woods’s mother approached the artist on the opening day of the exhibit to remark on his portrait of her son. “She said, ‘He really looks like he's resting.’ They were all just happy with how I captured the person.”

Art-1 is particular about reference photos for his murals. He explained that the pictures had to be as clear as possible. “I’m looking through the newspaper articles and the magazine articles and looking on Google Images to find those photos,” he said. Then he uses an app to create a digital rendering.

1-800 HAPPY BIRTHDAY was the first exhibit to open WORTHLESSSTUDIOS’s new space in Brooklyn, between Williamsburg and Bushwick, four years after the nonprofit’s initial creation in 2018. Studio founder Neil Hamamoto gave artistic direction to the project, which was curated by Klaudia Ofwona Draber in collaboration with the celebrants’ families and inspired by Gorjestani’s original digital works.

Hamamoto called the exhibit “the ultimate embodiment of our mission [at WORTHLESSSTUDIOS]. Transforming artist Mohammad Gorjestani’s digital project into a large-scale, interactive installation challenges the public by inviting them into the conversation about systemic racism through art and art-making.”

While the exhibition is on view, visitors can also participate in Family Meeting, a series of open conversations with families who have lost loved ones to police brutality. Led by Reverend Wanda Johnson (mother of Oscar Grant, one of the celebrants portrayed in Art-1’s mural), the program has already proven tremendously impactful on attendees. Other ongoing accompaniments include Community Days, where local culinary professionals offer food and visitors can meet Art-1 and other key individuals behind the exhibit.

For his part, Art-1 hopes that 1-800 HAPPY BIRTHDAY and Happy Heavenly Birthday will bring attention to the innocent lives lost to police violence. “The cop most of the time gets off, he gets a light sentence,” he stated. “Meanwhile, a whole community is losing a good person, a talented person, a person who had a chance to make it to be somebody, to change the world and that person is gone.”

The Bed-Stuy local pointed to the use of excessive force as a major contributing factor in police brutality, citing how the practice is often unfairly applied in Black and brown communities. “That's the harsh reality that anything that we do, we can get killed for it, you know, even reaching for our wallet.”

He believes that Bed-Stuy and other communities would benefit from police reform. “I feel that if we were able to have police that really were cool and understood the neighborhood that they're patrolling, they would know who the good kids are,” he asserted. “When there's such a disconnect between the police and the community, you know, they never get to know who the good people are.”

Art-1 built his reputation by using his artistic talent to celebrate Bed-Stuy’s history and take a stance against police brutality. This project falls closely in line with the rest of his work. In 2019 Art-1 and childhood friend Von Jefferson unveiled a mural honoring the late Boys and Girls High School Principal, Dr. Frank Mickens, a beloved member of the Bed-Stuy community.

“If it wasn't for him, we would just not even be caring about school and turning around the other way,” Art-1 recalled. Mickens played a crucial role in Art-1’s life, instituting programs that encouraged him and other students to care about their future.

“Dr. Mickens had a program called Dress for Success. So on Monday, Tuesday and Wednesday, you had to come to school, dressed in a shirt and tie,” he described. The goal of this program was to teach students to take pride in their appearance. Students learned how to present themselves and be taken seriously in professional interviews.

The disciplinary action for not dressing appropriately would involve wearing a less fashionable shirt and tie for the rest of the day, and be marked late. “That’s how he used to get us motivated to reach greatness, because we didn’t want to be embarrassed,” Art-1 said.

A large crowd gathered for the Mickens mural unveiling outside of Ideal Food Basket grocery store, where many neighborhood youths find work, including Art-1.

“That picture means a lot to people in Bed-Stuy,” he emphasized. “It means a lot because a lot of us grew up without fathers. So Mickens was our father.”

Much like Dr. Mickens and those celebrated in this exhibit, Art-1 has become a fixture of his community. He dedicates his life to honoring the history of Bed-Stuy and victims of police brutality by painting murals in public spaces. Bed-Stuy’s story is permanently displayed on walls throughout the neighborhood, free for all community members and police to see.

The 1-800 HAPPY BIRTHDAY exhibit is on view in Brooklyn until January 16th, 2023. After that, the mural will travel throughout the country on a museum tour. It can be dismantled into twelve pieces and easily transported. Art-1 said that the mural will be on display in New York, Los Angeles, and other cities throughout the United States.

For more about 1-800 HAPPY BIRTHDAY, visit the exhibit's page on WORTHLESSSTUDIOS' website. The exhibit will be on view at 7 Knickerbocker Avenue, Brooklyn, NY 11237 through January 16, 2023 and donations can be made to the Family Impact Fund through this link. View Gorjestani's original project at 1800happybirthday.com.

To learn more about Art-1, follow @art1airbrush on Instagram. Donations can be made to the restoration of the Jam Master Jay mural through this link.

Catherine McGrath is currently a senior at the University of Miami in Florida majoring in political science and journalism and minoring in creative writing. She has published work with Distraction Magazine, Behind the Hedges Magazine, The Miami Hurricane, among others. Cat has also been involved in organizations including Young and College Democrats, Climate Reality Project, and IGNITE women’s organization. For more about Cat, visit cemcgrath.com. 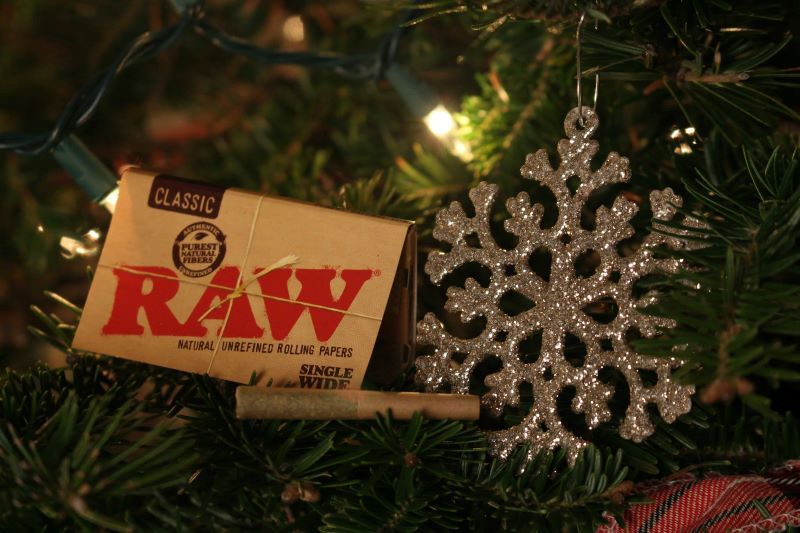 A Guide to Holiday Tipping... With Weed