College Behind Bars is a Work of Public Service

Lynn Novick’s brilliantly insightful documentary, College Behind Bars, screened on November 16, 2019 at the first Harlem Documentary Film Festival. The four hour, four-part series, executively produced by Ken Burns, is set to air on PBS on November 25th and 26th. Featuring the Bard Prison Initiative (or BPI, as members refer to it), a program which provides college opportunity to incarcerated individuals living in six New York State facilities, Novick’s film questions who  education is for, who is allowed to pursue a degree, and if schooling is a privilege or a human right.

As a 19 year old college student from Vermont, I never had to ask. I’ve been afforded academic opportunities my entire life, from attending a preparatory boarding school in New England to enrolling at The New School in downtown Manhattan. I’ve worked hard, but I’m also undeniably lucky— a cold fact I was confronted with while watching Novick’s film. I walked into the show unsure of what to expect but vibrating with curiosity. The venue was cozy and intimate, about the same size as my shoebox-bedroom in Greenwich Village. I immediately noticed that I was one of the only white people in the audience. As the documentary began to play, I quickly realized that none of the featured students were white either.

The film, which follows a group of a dozen BPI students and their families for the duration of their studies and reintegration into society, began rolling. I immediately took note of the program’s lack of material resources, and became increasingly and uncomfortably aware of my own privilege in the process. BPI students experienced severe limitations in accessing computers in which to type their essays: they employed the use of blackboards, and operated with a distinct lack of mixed media incorporated into lessons. Nevertheless, I heard no grievances— the pupils were just grateful to be learning something new. Sebastian Yoon of BPI’s Class of 2017 noted, “I discovered liberation in education. While reading books and writing essays in my cell, often late at night when it was quiet, the prison walls faded, my loneliness faded, and I became free.” At my university, on the other-hand, coursework tends to be thought of as a burden. I’ve often witnessed (and probably made) frivolous complaints such as a projector humming too loudly, or that the window in a seventh-floor classroom of a state-of-the-art building had a glare. Upon observing the differences, I felt ashamed and the duel educational system in America never seemed so stark to me.

A hugely important aspect of Novick’s directing was that the documentary lacked an omnipresent narrator. Instead, students told their story in their own words. This is a deliberate creative decision that led the film’s audience to recognize that there’s more to each individual than past actions or mistakes. The dozen students followed by Novick never revealed their crimes and were not defined by them, rather they were introduced and indicated as members of their major. In this way, College Behind Bars combats serial reprobation towards the incarcerated. During the post-film Q&A session, Dyjuan Tatro, featured in the documentary and now working as the Governmental and Advancement Officer at BPI, was quick to point out the issue of stigmatized language. Labels like “inmate” and “convict,” he reminded us, only contribute to a narration of condemnation and thus stall societal redemption. Using these types of words makes it easy to forget that the person being described is just that: a person, and inherently human.

Reminding the general public that interns are just people was also a central aspect of the documentary. As I followed their journey, I became emotionally invested in the success of Novick’s dozen students. I found myself cheering on the BPI Debate team as I watched them prepare for a meet against the University of Vermont, my home-state college. I felt triumphant when the incarcerated coeds won. I clasped my hands to my chest and cried while watching footage of the graduation ceremony. I felt outraged on Tamika Graham’s behalf when witnessing her mother’s less than supportive attitude towards her daughters academic pursuits. Graham commented, “[My mother’s] voice is important in this film and this conversation. She represents a lot of Americans who are worried about the outrageous cost of education, and where our tax dollars are going. However, we cannot abandon people in prison nor the investments that give them hope for the future.”

But truly, this film gave me hope for the future. How can I feel anything else after intimately witnessing the stark devotion that Novick’s students showed their collegiate pursuits and self-betterment? I believe that the best one can ask of somebody who has done hurtful things in the past is to wholeheartedly try and improve themselves. Such a feat is achievable through education and positive learning environments. Once that goal is accomplished, I think, contributing to society in a meaningful way is possible and therefore redemption is attainable.

I want to sincerely thank Novick’s students for allowing the public such an intimate glimpse of their lives and path to vindication— thank you for the disillusionment, the change in perception, and the frank reminder to focus on my homework. College Behind Bars is an exemplary work of public service.

Riley Dole is a creative writing student at The New School. You can follow her on Instagram @riley_dole or reach her via email at rileymdole@gmail.com 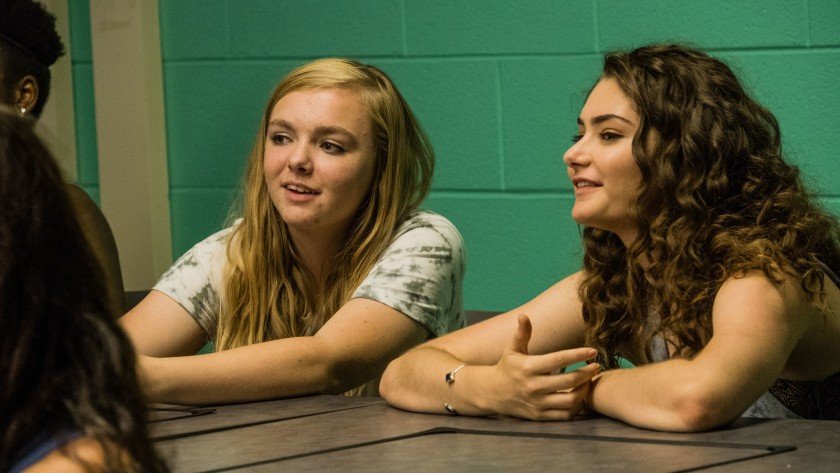 Emily Robinson: The Mentor We All Needed in Eight Grade