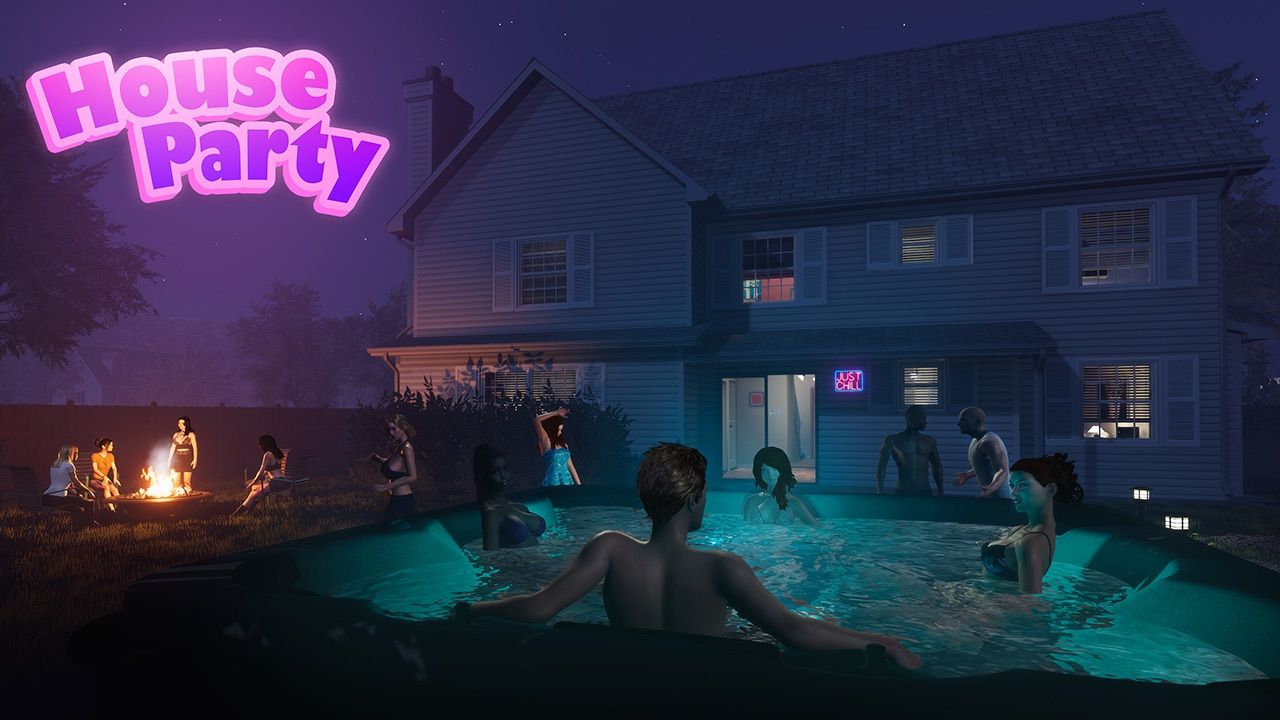 Bobby Ricci, CEO of the development studio Eek! Games has come a long way since the early access release of his game House Party to Early Access in 2017.

Bobby Ricci, CEO of the development studio Eek! Games has come a long way since the early access release of his game House Party to Early Access in 2017. Since it was labeled controversial and over-sexualized by game journalists shortly after its release, House Party has become much more than the niche salacious romp its critics originally predicted. In reality, Ricci told Honeysuckle, only five percent of the game includes sexual content. The rest of it, “absurd and meant to be that way,” is an interactive parody of-—you guessed it—a house party.

A game based solely on player choice, House Party contains 25 different story opportunities and hundreds of branching storylines for players, who have the chance to form relationships throughout gameplay with ‘NPCs’ (non-playable characters, or in Ricci’s view, non-boring party comrades). Some of these relationships include the possibility for what the House Party website describes as “fully interactive intimate encounters with changeable positions.

Over the past six years, the title has acquired a global audience of nearly 1 million players with 85-95 percent positive player ratings on Steam despite the early rebukes by game journalists. Ricci spoke with Honeysuckle about his views on the controversy that he believed to be baseless considering his game that, yes, includes sex, but certainly isn’t defined by it.

Ricci believes that the critique that House Party is somehow perverse because it includes sex is a non-sequitur since it doesn’t actually call into question the quality of his game. Quality, not morality, should be the basis for judging video games, according to Ricci.

Ricci believes the game’s sexual content may have caused a bias on the early reviewers’ parts. He commented, “If a similar game without sexual themes had come across their desk with humor, twisting storylines, overhearing mechanics, presented as the sandbox/adventure hybrid game that House Party is, I think they would have seen behind the early and janky mechanics, a promising fresh concept, and a charm to the game. I feel like reviewers and a lot of journalists are almost afraid to give a positive review to a game with sex in it, and walk on eggshells about what they are about to say about it.  The player response to the game has been the polar opposite of these reviews, but players go in just hoping to have fun, and I believe that's where the disconnect is. As House Party has grown, reviewers have taken a different approach, especially in the light of 90 [percent] positive player review scores, and their reviews now read more like ‘Let's be clear, I don't like this game, but a lot of other people do, but it's also really fun to play, so I can see how people like it, but I don't like it!’”

The initial reviews given to House Party were also misaligned with player experience, which Ricci believes has something to do with intention. Players were going into the experience just hoping to have fun, and the positive player reviews reflected that.

Actually, Ricci was surprised by the initial controversy surrounding the game. In his view, he was releasing a silly game focused on the absurd possibilities of a night out. In a world dominated by violent and sexual content (he uses the hit HBO series Game of Thrones, at its peak popularity in 2017 as an example), he couldn’t have imagined that his lighthearted game, a comedy at its core, would be the target of so much criticism.

“I knew when I approached the game that I was going to have to touch on sex in some way because it’s a staple of most type of parties: drinking, dancing, fighting, drama, drugs, sex,” Ricci said. “It’s all kind of encapsulated within the genre.”

The sexual scenarios in question are presented with the same levity as every other scenario in the game, according to Ricci. House Party is not a game that portrays any kind of sexual violence because it doesn’t fit with its tone: silly, carefree, even zany—but certainly not heavy or violent.

“My game is a comedy game, and I’m not trying to make any points about anything, I’m just trying to let players enjoy themselves in a silly environment,” Ricci said. “I think that the way you portray sex in your respective piece of art really has to match the tone of what you produce, I’m not trying to say you can only have sex in games or media if its portrayed a certain way."

Ricci is surprised by the the negative connotations given to representations of sex in the video gaming world, especially in comparison to prolific violence that has been normalized in the same medium. According to a 2018 Healthline study, more than ninety percent of video games contain violence.

Further, games containing violence aren’t automatically labeled as violent, unlike what was done to House Party, which some deemed pornographic for its sexual content. Grand Theft Auto, a notoriously violent video game with 55 percent of players under 18-years-old, is described by Wikipedia as an action-adventure game. Ricci wants to make clear that House Party is not a pornographic game, it’s just a game with sex in it.

“[If] you take your sentence and replace the word sex with murder, and now it’s okay?” Ricci said. “It never made sense to me at the start and it doesn’t make sense to me now.”

Ricci thinks that audiences are more used to portrayals of sex and violence in other mediums, like movies and television for example, than they are in interactive games. He identifies two elements to this problem: “Number one, it just hasn’t really been done a lot, so people didn't know how to react or feel when this thing that’s really popular in movies is suddenly in video games. There's also the element that people, especially people who are detached from the video game world, think that video games are marketed primarily to young children.”

This key misunderstanding surrounding the target audience for video gaming may provide an explanation for critics jumping to label a game as pornographic.The video gaming community is relatively insular, usually assumed to be made up of pre-teen boys playing in their parents’ basements after school. In reality, the average age for gamers is 30-35. House Party in itself is not a game marketed to underage children, it’s a game made by and for adults. The censored version of the game is available only for players 18 and older; to unlock the uncensored version, you must purchase an “adult-only” version.

Despite its rocky beginnings, House Party has thrived and the stigma forced upon it has begun to decrease. The game, now translated into seven languages, has a loyal global audience. Ricci has seen clear cultural differences in the way the game has been received abroad, explaining that he believes there is a very different attitude towards sexual content in video games overseas. He even goes so far as to say that in Japan, the stigma is flipped—violent content is largely unpopular in Japanese games, while sexual content is ubiquitous. Mortal Kombat, another notoriously violent video game, is banned in Japan. However, the Japanese video game RapeLay follows a character who stalks and rapes a mother and her two daughters.

“I think America just tends to be a little more conservative in terms of sexual content, and they’re less likely to accept it on its merit but more likely to condemn it simply because it's there,” Ricci said.

House Party is a unique game, and not because of the five percent of it that has created controversy. Player agency is integral to the game, which Ricci believes has something to do with the loyalty its fan base has shown. It is truly individualized, meaning players make their own decisions and live their own outcomes. This includes which characters they interact with and what outcomes they seek. It’s physically impossible to experience the entire game in a single play through because there are so many different decisions and outcomes that can be determined by the player. Elements that simply don’t exist in other games, like the possibility for characters in the game to overhear conversations and act accordingly, make it unpredictable and exciting for seasoned gamers. Ricci wants people to see that his game has merit outside of the controversy that once surrounded it.

Many have seen House Party for what it really is, and because of that, Eek! Games have experienced success. Originally a solo indie game developer, Ricci has been able to hire a team of developers to continue work on House Party. This has allowed him to return to the vision he first had for his game, to a time before the stories he wanted to tell had to come secondary to the actual creation of a functioning game. Now, he’s returned to the creative side of things, shifting his attention towards new growth for his company and the creation of new code.

In March 2022, House Party will be leaving Early Access, essentially meaning that the game will be released in its final form. 312,000 people with the game on their wish list will be notified when that happens.

The finished game will also include the option for a female or male main player, which Ricci says “is awesome because I didn’t want this type of game that has this kind of content in it to overwhelmingly appeal to men.” Eek! also has an exciting brand deal coming soon with an unnamed celebrity who will have an interactive role in the game as a new character.

As finishing touches are added to House Party, Ricci and his team at Eek! Games are already looking forward to the future, with production having started on the game’s sequel, Office Party. Office Party is an expansion of the House Party universe, a continuation of the hard work Ricci and his team have put into creating a space for gamers that is interactive and lighthearted. In the end, that’s been his vision from the beginning.

“The game is completely absurd and meant to be that way, and that’s what I wanted it to be from the get-go. Silly, funny, zany,” Ricci stated. This, not its controversy, is the legacy of House Party.