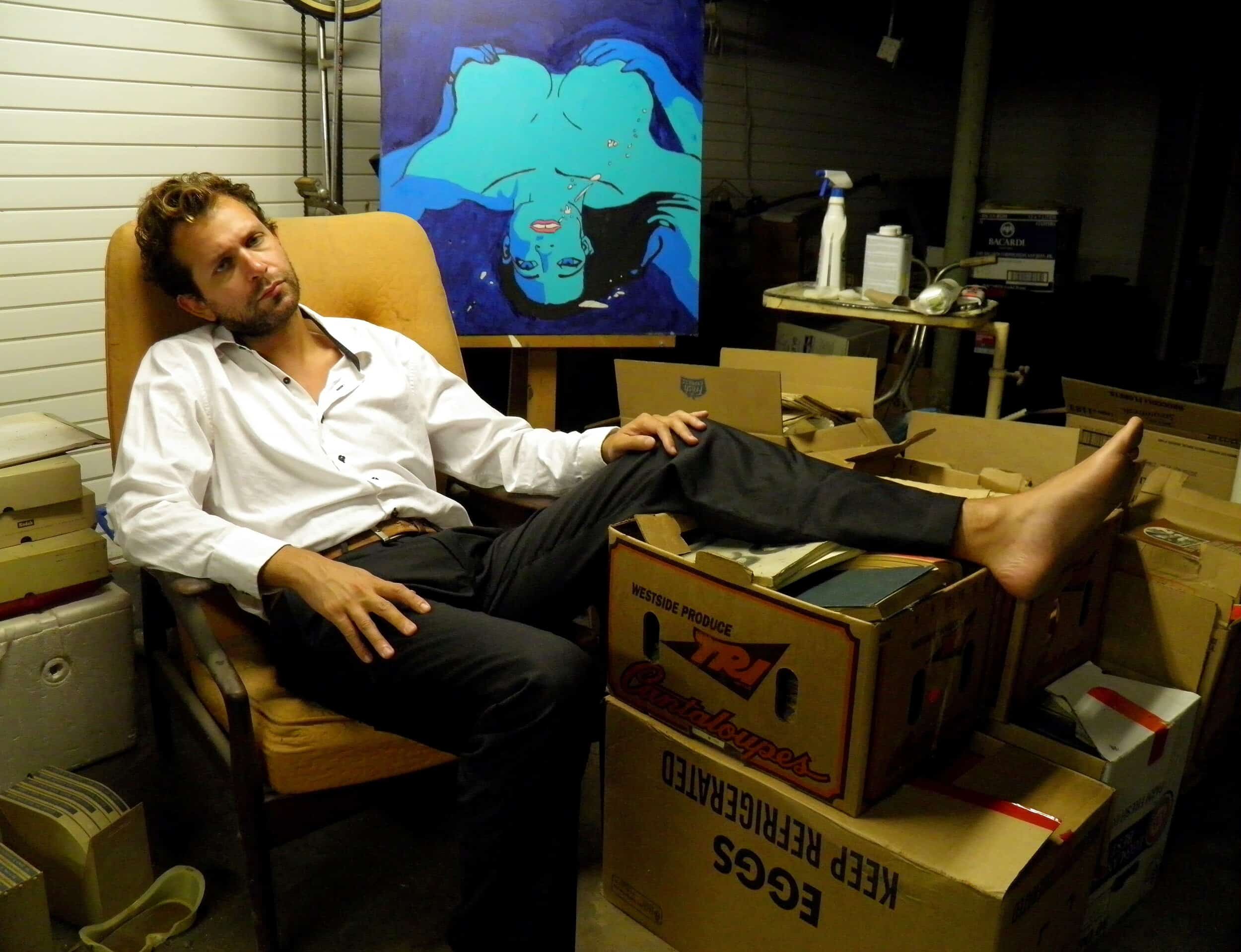 Royal Young is a multi-media artist of the best kind. A painter, poet, journalist and editor, (proudly, he's our Editor-In-Chief) he grew up in a very creative yet at times tumultuous household on the Lower East Side of Manhattan.

Royal Young is a multi-media artist of the best kind.  A painter, poet, journalist and editor, (proudly, he's our Editor-In-Chief)  he grew up in a very creative yet at times tumultuous household on the Lower East Side of Manhattan.  The third-generation artist (following his father and grandfather) debuts his first solo artshow at Figureworks Gallery in Brooklyn, this Saturday, September 12. Allegra Vera caught up with the talented gent to dish about his upcoming show.

HS: At what age did you start painting? Do your early memories involve art?Royal Young: My father is an artist and I grew up in his studio on the first floor of our renovated Lower East Side tenement building. My first word was "mask". I would draw as my dad constructed papier-mache skull masks of Republicans that went on to cause a stir when he showed them in Washington DC in the early '90s. Art and memory are inextricably mixed up for me. I always saw life visually and the downtown Manhattan I grew up in was covered in bright, vivid murals and neon graffiti.HS:  How did growing up in a creative household in the LES in the late 80's/early 90's affect and shape you?

RY: The biggest part of growing up with an artist dad in New York was the work he did in the subways commissioned by the MTA. It showed me that art was something public, something that could change people's lives and make their every day hustle inspiring. My father had a huge painted mural that took up the entire Essex Street F/J/M/Z stop platform. I remember going to the opening and watching junkies mix with dreamers. When my dad's mosaic murals which he did in collaboration with kids at PS 41 were installed in the 1 Train Christopher Street subway stop I got to take the day off school for the opening and my parents took me and my younger brother to the top of the Empire State Building for the first time. It made me feel like creativity could conquer the world. Something magic.

HS: You went to LaGuardia, a public and prestigious art focused high school in Manhattan. It is obvious that you are a writer (your memoir, Fameshark, was published by Heliotrope Books in 2012), but you attended school for painting. Can you briefly tell me what that was like?

RY: I specifically remember telling my dad when I got into LaGuardia for fine art that it would make my writing more visual. Even at 14, I felt that painting was his realm and writing was mine. But yet there is such a huge part of me that yearns to draw. My high school experience went under appreciated. I think like most teens I didn't understand the incredible experience I was having. I was trained in print making, 3D design, mixed media, ceramics and my favorite life drawing where our parents had to sign a permission slip and we got to draw nude models. I had the opportunity to spend half of my day in art studios. Yet, in my senior year when I was chosen to have my own gallery show in the school's highly competitive gallery I spent most of it huffing glue and turpentine and drinking vodka in the gallery storage room. Pretty dumb but no regrets.

HS: Your first major solo show is coming upon Saturday, September 12th.Congrats! How did you execute that? Were you approached or was it your idea?

RY: My friend, the photographer/director Cathrine Westergaard introduced me to Randall Harris, the gallery owner at Figureworks. She had shown her incredible, enticing collage paintings there and wanted me to meet him. After over 10 years of focusing on writing and living in Bushwick and the LES I had given up my apartment and moved into my grandparent's attic in Long Island where I created a studio space and started painting again. Randall loved my work and offered me a solo show. During the year that I was painting in Long Island, my friend Cathrine was diagnosed with stage 4 colon cancer. As a single mother and all around gangster she fought hard all winter and died this past June. I love her and she changed my life. My show is dedicated to her.

HS:  How did you choose the title “Lush Doom” for your show?

RY: Lush means decadent to me but in a natural way, also a lush is a drinker which I am. Doom because there is loss and longing and death behind this show.

HS:  Your paintings are very colorful, sexy, and provide an interesting twist on modern art and portraits. Can you name a few influences?

HS: Lastly. What do you see for the near future of the painting scene and how do you envision your role in it? Are you optimistic?

RY: I wish that New York was still a home for creative people, that they could come here with nothing but a gamble and still thrive in a creative, affordable community. It is not anymore. This is not about nostalgia. This is not about the New York that was--we have neighborhoods populated by empty condos. Wealth feeds on places that art has made "cool." Enough.Honestly I don't know much about the art scene or any "scene." When I was 18 I spent a lot of time wearing gold chains, fur coats and doing coke at Meatpacking gallery opening after parties. That was 12 years ago. Now I just want to paint and write in peace. I crave some non soul sucking island. The world is ending anyway.

LUSH DOOM will be on display through October 9 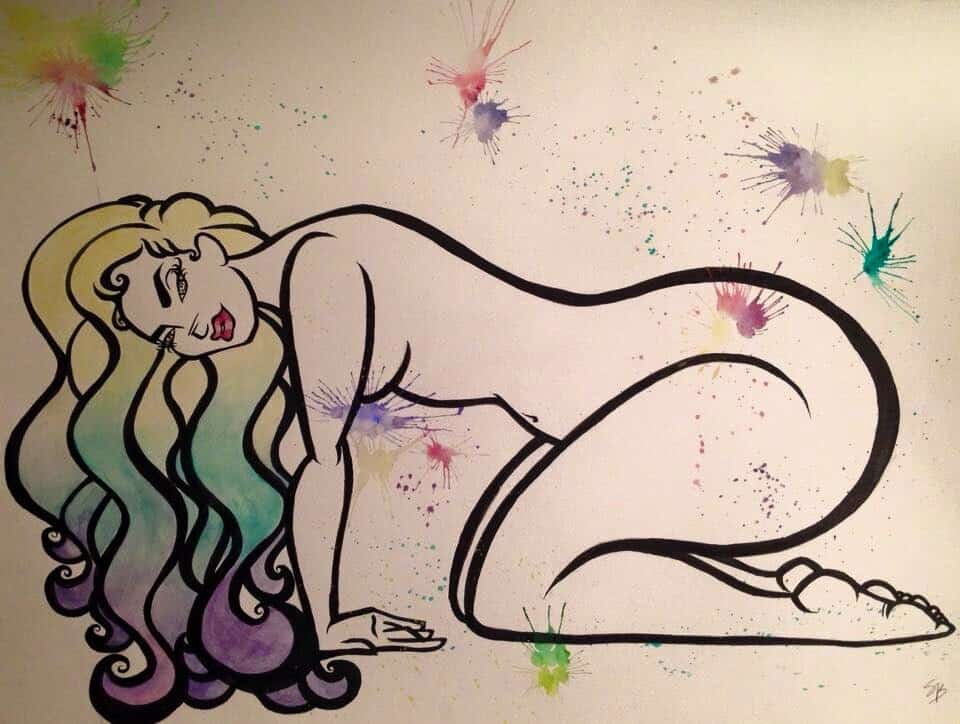 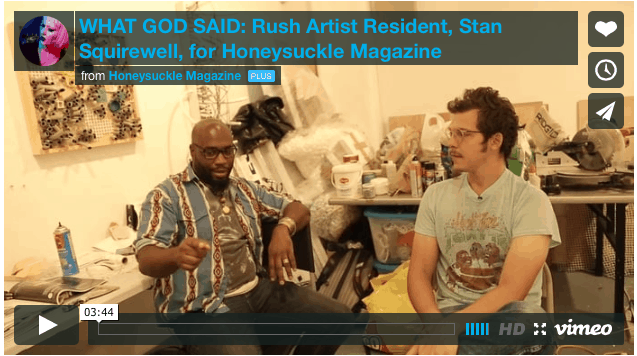