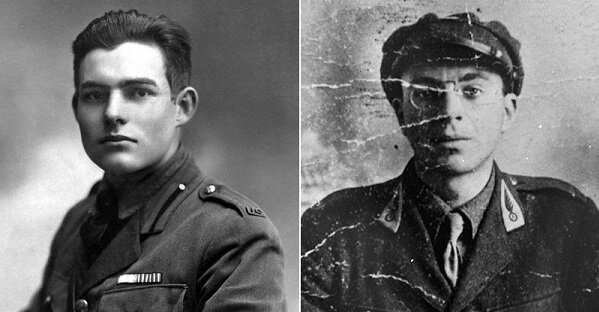 A century after Ernest Hemingway and John Dos Passos served in World War I, their messages linger in our memories and hearts.

It’s been going on for as long as most of us have been alive. Even longer. The Hemingway Mystique is a publishing phenomenon every bit as real as the Elvis Mystique in the world of music. And this season is no different – a slew of new biographies recently appeared and Papa is at the center of each one of them.Biographer James McGrath Morris is to be commended for doing something unusual and highly necessary in his book The Ambulance Drivers: Hemingway, Dos Passos, and a Friendship Made and Lost in War (Da Capo/Hachette, 2017). Rather than merely recycle aspects or elements of the all-too-familiar Hemingway legend, what Morris has done is focus with superlative intent on recapitulating how the First World War galvanized the coming-of-age of young Hemingway. And yet, there is much more here to learn, because Morris has woven together two coming-of-age stories and the other topic is long overdue for a revival, both in terms of readership and scholarship.

John Dos Passos, who once upon a time was as famous as Hemingway, Faulkner, and F. Scott Fitzgerald (in 1936 it was John Dos Passos who made the cover of TIME Magazine), was not just another writer who knew Hemingway or who served in the Great War. The value of Morris’s important dual-biography is that we are reminded of how much has been lost—for decades—as the Hemingway Industry stayed in overdrive, while the great and good works of John Dos Passos were gradually consigned to oblivion.Let’s shine a light on the books. Yes, there remains little doubt that young Ernest Hemingway revolutionized how the English language could be used in short stories and also in novels. And no doubt about it, some of those early stories (“Big Two-Hearted River” and “A Clean, Well-Lighted Place”) and the novels The Sun Also Rises and A Farewell to Arms remain the landmarks in literature that they always were. However, it is a cultural crime that for all the wrong reasons, the equally bold, equally innovative, and in some ways far more daring narrative achievements of John Dos Passos have been eclipsed in college courses and forgotten by readers.A quick recap: John Dos Passos was a few years older than Hemingway, and zipped through Harvard prior to volunteering as an ambulance driver in World War One. Dos Passos found himself “over there” in 1916, two years earlier than Hemingway. And it was Dos Passos who had a much more traumatic eyewitness exposure to the insane strategies, the mindless slaughter of endless thousands of young men at Verdun, and all the other scabrous details of the Great War’s demonic mayhem. Nonetheless, even though he was appalled and stricken by the First World War’s colossal destructive force (all of which still affects the geopolitics of our world), Dos Passos wanted to see it up close, and he knew it would induce his writer’s quest.That’s the key to what bonded Hemingway and Dos Passos. Both young men made a decisive effort to enlist as volunteer ambulance drivers to accelerate how quickly they’d be able to get assignments overseas to witness the war. While their very different emotional and psychological and social backgrounds had much to do with how varied their reactions to the war turned out to be, it connected them as men.On the Italian Front, in 1918, where Hemingway would be wounded by shellfire and where his own legend would commence (newspapers in Italy and America made a big story out of a badly wounded Ernest carrying an unconscious, wounded Italian soldier to safety), there was a brief encounter between Hemingway and Dos Passos. But it was after the war, in Paris in the early 1920s, that the two emerging writers became the best of friends and travel companions, kindred spirits in every way.They were setting out to alter and even reinvent American fiction. And when books, writing, revising, and haggles with publishers did not preoccupy them, they had their new wives and varied European travels and adventures to share. As for reconfiguring American fiction writing, there is no question but that they both succeeded. Even now, nearly a century after the vaunted Paris in the Twenties glow, the crisp, angular, simple declarative sentences of Hemingway’s early work startles readers with its clarity, precision, and mastery of movement.But John Dos Passos?

We have all been cheated. And the legacy of Dos Passos has been cheated most of all. Because his extraordinary writing experiments—especially the ways in which he used newspaper clips, song lyrics, historical quotations and visual montage from American lore to illuminate and illustrate the radical changes in life at large as the USA was transformed by urban and technological developments occurring at warp speed in the postwar years—well, those unique achievements have never been given the chronic attention that Hemingway, Fitzgerald, and Faulkner still receive.If there were any justice beneath the moon, the best novels by John Dos Passos (Manhattan Transfer and Three Soldiers, for starters, and also the three major works later collected as the U.S.A. trilogy: The 42nd Parallel, 1919, and The Big Money) would be as familiar as For Whom the Bell Tolls. They certainly used to be.In his excellent dual-biography, James McGrath Morris gives readers a first-rate assessment of how and why and when the varied novels of John Dos Passos generated such controversy, hefty sales, and critical respect in the 1920s and the 1930s. It’s clear that in many ways, Dos Passos took bigger risks than Hemingway.

Yet, unlike Papa, there was no ferocious competitive edge to Dos Passos. He didn’t cultivate media attention like Ernest, who with his exploits as a hunter or fisherman or boxing-and-bullfighting aficionado did much to create the very notion of the celebrity writer as a public figure. And, of course, the novels of John Dos Passos were never made into films – whereas A Farewell to Arms became a hit movie with Gary Cooper and Helen Hayes only three years after the book came out. In subsequent decades, almost all of Hemingway’s novels became popular movies.But the lousy truth is that as he aged, and particularly in the years after the Second World War, the formerly Left, radical, progressive politics of John Dos Passos moved to the Right. The schnooks of academe never forgave that.There is no more intelligently pulverizing and truly anti-war novel of WWI than Three Soldiers by John Dos Passos. His indictment of military obtuseness and the dehumanizing effects of conscription and trench war remain staggering. Yet it’s the romance of Hemingway’s wounded soldier and his nurse in A Farewell to Arms that sticks in the national consciousness. As Kurt Vonnegut would say, “So it goes.”We have lost a great deal by not paying more attention to the life and work of John Dos Passos. Morris’s The Ambulance Drivers helps us to rectify that error. To follow the lives of these two male authors as the First World War gave way to the Roaring Twenties and the postwar Paris epoch, and then the Great Depression and the Spanish Civil War (the 1936-1939 crucible that both intensified and sundered the robust friendship of Hemingway and Dos Passos) is to relive half of the twentieth century.Just because John Dos Passos wrote articles for William F. Buckley’s National Review in the 1950s and 1960s is no reason to ignore his trailblazing novels. One hundred years from now, when readers want a wide-angle view on how lives were lived and lost in the years between 1914 and 1960 (more or less), it will be the fiction and journalism of John Dos Passos that are ascertained as revelatory.Hemingway will always be important. But the most important thing about Morris’s dual biography is that it reminds us that reading John Dos Passos is even more essential.Hemingway’s canon boils down to The Importance of Being Ernest.  The oeuvre of John Dos Passos is nothing less than the Autobiography of a Generation.–

(M. J. Moore is Honeysuckle Magazine’s RETRO columnist. His novel, For Paris ~ with Love & Squalor, was published last October. He’s now completing a biography of Mario Puzo, to be released by Heliotrope Books in 2019.)