Feminine power, expressed through human consciousness, is the embodiment of the divine essence of creation within the soul of your being. It allows one to understand that life energy is always both masculine and feminine and one without the other will not thrive. Feminine power at its purest essence represents the void or essence of being without forced effort. It allows life to be, as it is, and experienced through a vision of truthful compassionate awareness.

The feminine aspect of the divine is a powerful creative force in the world to be accessed by all beings – male and female. Feminine power, can be expressed through intuition: the expression of knowing and sensing the world without the filter of the ego. Intuition is the foundational energy of feminine power. When intuition is flowing, the deep wisdom of the soul moves one into harmony and nurturance of life at its highest levels. It is a creative force that expresses supreme love, understanding, guardianship and nurturance for all life. Feminine power moves on into the stewardship of all innocence and truth. It emboldens one with tending of earth, animals and humankind equally. Feminine power, when wielded in the human form, can move mountains and birth life into creative expressions that are not realized yet, on the earth. However, feminine power without realization of masculine power will be incomplete. Living in full consciousness of these cooperative energies within oneself and life will bring about the greatest fulfillment and transformation within one’s being and throughout human consciousness.

How does spirit see femininity in this day and age?

Feminine power has long been denied, minimized, devastated by the worship of the masculine energies of human consciousness in the past several thousand years. The divine feminine is now returning into the foreground, as a means of saving the earth from being lost to the hands of this imbalance. When feminine power is returned within all beings – male and female – the earth’s energies will become more balanced.

It is most is important for all women, in this era, to awaken to their divine feminine power.This feminine power is a receptive, allowing force, that can create, manifest and allow great healing to be experienced on all levels within life, when in flow. Feminine power has a magic, creative expression of sensual beauty within it. It is an enduring force of unequaled wisdom, insight, perception of that which is non-linear. It relishes in the feeling state of the human experience without downplaying the wisdom and intellect of the mind and soul. It is a heart-centered purity of love without affection; compassion without judgment; and care for life without restraint. It does not take from life but allows life to be and flourish through nurturance, honor and reverence. Feminine has been demonized, minimized, denied and squandered. It is a force of receptivity and flow; knowing and creation; being and honoring.

What are our strengths?

From the perspective that you ask, feminine power is about owning one’s true divinity and expressing that which is an emancipated loving, compassionate, pure, giving, confident, fluid, intuitive, creative boldness within you. It is no longer tolerating a patriarchal ideal. It means shifting that which has been privileged and out of balance, into harmony with life. This requires all beings – male and female – to embrace intuitive wisdom; creative power (manifesting and creative expression); healing power and the ability to shape-shift (express multiple facets of being in one body, as an integrated tapestry of light). Feminine power is the receptive, intuitive reflection of that which we see in the moon. Feminine power is a creative flow of wisdom that allows one’s divine essence to be seen without resistance. It embraces the whole of life without recoiling from the depth of shadow and light.

What are our purposes and what are the risks of expressing femininity?

The purpose of expressing femininity is to revere the wholeness of creation by breaking it down into dualistic experiences. When one expresses femininity, they are allowing the purest mother-earth shakti-energies of creation to be fully honored. This brings out that power of creation long held at bay. Feminine power does not equate with stereotypical concepts of femininity. Feminine power is pure creative power that can move mountains and create form from primordial essence. It does not mimic masculine energies or stereotypical masculine force. Feminine power is a unique expression of allowing the innate power of one’s soul and connection to all life, into one’s conscious experience of life.

How is it being expressed differently than in the past and how will it be expressed in the future.

For women and men to flourish, one must honor feminine energies within oneself and all life. There is no more time to waste on earth before this realization. Women are awakening in large numbers and their awakening will serve a resurgence of harmony on the earth. But it is imperative that women do not mimic masculine power or attempt to react to that power. Rather, feminine power must include the reverence for masculine energies to create true harmony of life.

This is the era for divine feminine power to surface into its full expression on the earth. Women will lead the way for awakening consciousness, when these powers are embraced.

Remember this: love is the highest frequency of divine expression available to all humanity. When feminine and masculine powers are unencumbered and fully aligned with love, this harmony will create exquisiteness on the earth.

A version of this article appeared in print in Honeysuckle Magazine’s HERS issue, summer 2017 edition. 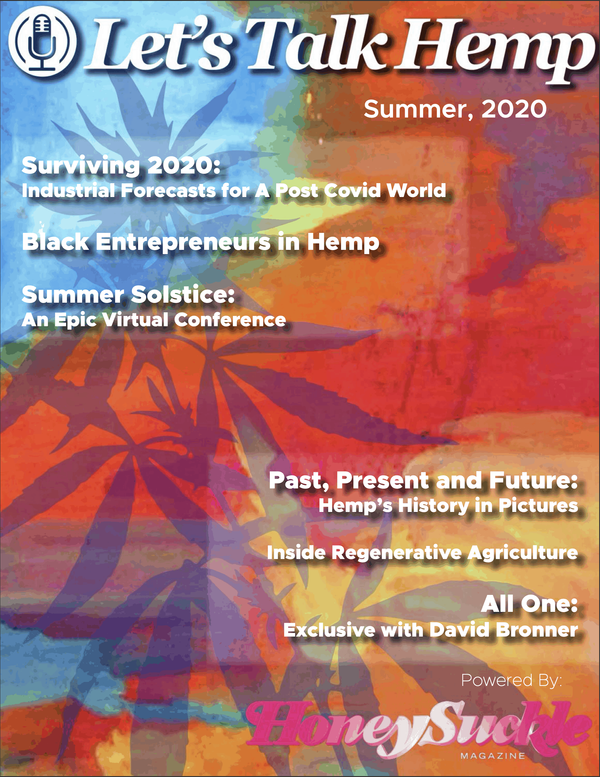 The hemp industry proves that, even in a world plagued by pandemics and racial injustice, human and planetary healing can and will triumph. NoCo Hemp Expo, the world’s largest industrial hemp conference, is back for the Experience Hemp Summer Solstice Virtual Conference, which kicked off today and