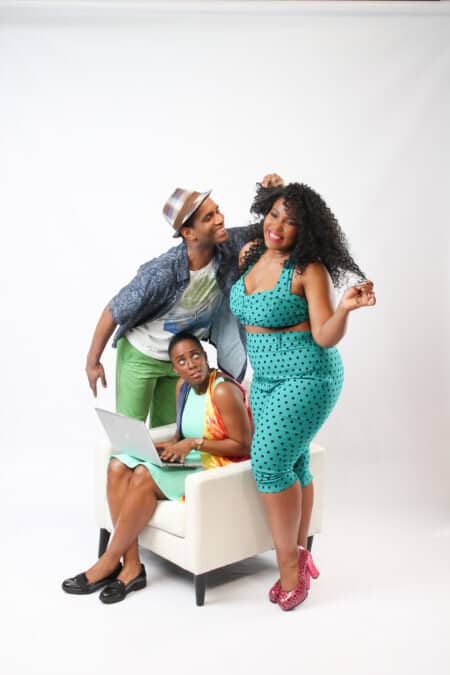 When discussing how important it is for black love to be represented in the media, Lowe III believes it is time we change how black bodies are portrayed.

The new web series Bubbly Brown Sugar transcends everything involving, black love, romance, and finding one’s soulmate. Tamala Baldwin, who is the creator, co-director, and executive producer of Bubbly Brown Sugar plays a bubbly, sweet hopeless romantic, named Jewel. Bubbly Brown Sugar is about two soulmates meeting in their dreams and their parallel journeys to finding each other, upon waking up. Jewel’s dream love Caleb is played by Rich Lowe III, who is an actor and musician.

Caleb who recently went through a rough breakup with his ex girlfriend Angela, is trying to navigate life without his former lover while dealing with his newfound lust for Jewel. The opening of the show, which consists of Jewel and Caleb dreaming of each other, hooked me in immediately. Being able to watch two characters fall in love in their dreams, without knowing who the other is in real life was new for me. I found myself wanting to binge-watch the entire season.

It’s easy to find Jewel’s bright and bubbly personality intriguing. Equally intriguing is her relationship with her best friend and colleague Kwame, who is played by actor James A. Pierce III. Kwame at first is reluctant to believe that Jewel’s wet dreams are anything to be taken seriously. He gives in when Jewel pitches an idea to use her video platform, “The Morning Good” to talk about manifested love and finding the man of her dreams.

Recently, I had the opportunity to attend the Bubbly Brown Sugar series’ red carpet event in Littlefield Brooklyn, and was able to speak to most of the cast and crew, who were ecstatic about the project.

“Black love is what drew me in and an opportunity to be a part of this project, where it’s all about black people loving on each other and just living their everyday lives,” said Verta Maloney, who plays Toccara on Bubbly Brown Sugar. Toccara works for radio host Gigi Hernandez on the “Say What! With Gigi Hernandez” show, where Jewel is a guest. Gigi Hernandez is played by actress Sabrina Athena. “It’s just about black love. I think that it’s relatable to anyone and at the same time, if you see the cast the melanin is poppin’ sis, we are beautiful, and to see that on the screen and  just know that it doesn’t have to be any one kind of way is what I think will resonate with people and it’s bleep fucking hilarious,” Maloney laughed.

James A. Pierce III felt drawn to Tamala and his character, Kwame, from the very beginning. “The first thing that drew me in before the audition was the breakdown of Kwame. When I was auditioning for it, I already knew exactly who Jewel was in my life. I have quite a few Jewels in my life.”

When discussing his friendship with Tamala, Pierce III gushed about his co-star and creator of the show.  “It’s funny people on set thought we must have been friends for life, and I met her at the audition. And she is like one of my best friends now.” For Pierce III, his friendship with Tamala mirrors real life. “I check in with her, she checks in with me when I’m going through things, and vice-versa. So, we’ve kind of become Kwame and Jewel.”

Rich Lowe III, who plays Caleb, Jewel’s soulmate, says he also felt that his character mirrored real life. “I feel like I actually absolutely was Caleb at some point in my life.” Lowe III believes wholeheartedly that this is a project that will resonate with many. “Everybody loved something, or someone; or been somewhere to love something and lost. I think this is a show that really has a lot to do with that, whether you loved someone and you don’t anymore, whether you lost someone and you want them back; this show has a bunch of that.”

For Lowe III, the best part about working on the show was the chemistry on and off the set. “I got to make a lot of friends and there was chemistry that you kind of can’t fake. We laughed off camera when we weren’t filming, we mesmerized the lines and ran through it a billion times if we had to; it was just equal dedication from my counterparts.”

When discussing how important it is for black love to be represented in the media, Lowe III believes it is time we change how black bodies are portrayed. “People need to understand that we’re more than drug dealers and gang members and stuff like that. We love, we bleed, we cry, we laugh, we fight, we do all the things that everybody else does as well. So black love is important to see, for the children to see it.”

Tyrone Reeves who plays Josiah, Caleb’s colleague and right hand man agreed with Lowe III’s opinion on how black people are portrayed in the media. Reeves believes that Bubbly Brown Sugar differs from others, because it shows beyond black stereotypes. “It shows business owners, people who are genuinely in love with each other; nobody running around cheating and nobody bashing their baby mama or, baby daddy.”

Neena Bhanti, who is one of the producers, was drawn to the series due to its fantasy aspect. “You know this story is about love and fantasy. And I think people out there nowadays, they want to find love and when they don’t find love what do they do? They fantasize. That’s why I think this story’s so true, I think it’s so real for so many people, not just for the characters that are in our episodes.”

Bhanti was proud to be a part of the series not only for the content, but because of the diversity on screen and off screen. Director and editor LaVarro Jones is African American, as well as the creator and co-director Tamala Baldwin. The only cast members of the series who are not of color are Maria Tholl, who plays Meagan and Shawn Dawiskiba, who plays Mike.

“I’m Indian and so a lot of times I watch TV and film and wonder how come we don’t have more women of color? Even Indian people, even Black people, why don’t we see them as much on TV? There’s so many roles that can be made for people of color. That is one of the reasons I’m so fond of this project, because we have cast so many people of color and are telling true stories about different cultural aspects that the world can see. So, I think that’s one of the reasons why Bubbly Brown Sugar is different and it gave so many actors of color a chance, even producers of color.” Behati said.

I spoke to Tamala Baldwin after the red carpet event in Brooklyn, and was fascinated by how she was able to handle wearing so many hats on the show, while also working as the CEO of Soul Kisses Productions. “When you are working in your business, it’s hard to focus on growing it. I definitely don’t recommend other people to follow in my footsteps. I just happen to LOVE every aspect of storytelling and wanted to open my own door, rather than waiting for someone else to say YES to me.”

For Baldwin, creating Bubbly Brown Sugar was a no-brainer, the quote “be the change you wish to see in the world,” rang true for Baldwin. “I grow tired of seeing beautiful black women of color on screen portrayed as the angry black woman. We are soft, intuitive, sensitive, loving Jewels, that are quirky and dream of receiving their happily ever after. All of these things combined, inspired me to write Bubbly Brown Sugar.”

Similar to her character Jewels, Baldwin can relate to being single and a hopeless romantic. “On a personal note, I have been single for such a long time that I just poured my fantasies and visions on paper- I mean, since it hasn’t happened in the physical just yet – I created a place where what I want could exist.”

Baldwin created two complex characters, and found a way to intertwine them in ways that not even they understood. Jewel and Caleb have a way of hooking you in from beginning to end. “The fact that their ENERGIES are meeting before their bodies touch, is so compelling to me! I believe so much happens BEFORE we can see it with our physical eyes. I thought it would be so fascinating to play on that idea… how to make the unseen seen so to speak.  Everything we want has already happened … it’s our physical that sometimes has to catch up to what’s already done, if that makes sense.”

Baldwin says, that for future projects she wants to keep pushing the envelope, by incorporating fantasy elements. And write more films that showcase black female leads in unconventional roles, to influence the way people view them.

As for the lack of healthy images of black love on primetime television nowadays: “I refuse to watch many shows on primetime just for that reason – I don’t want to plant those types of images in my subconscious. I want the fairytale. I get enough of the heartache in my real life – no need to watch it as a form of entertainment as well.” said Baldwin. “Bubbly Brown Sugar is meant to show black and brown people of color experiencing their happily ever after, which is something we don’t readily see on screen. I know black pain very well. I want us all to know black joy, black magic, black light, black love in greater and greater propensity,” said Baldwin.

Looking for different kinds of joy? Before you start your next adventure, click here to know how to find your sugar relationship.

Based in New York, Ali McPherson has published work in HuffPost, the New School Free Press, and Eleven and a Half Literary Journal. 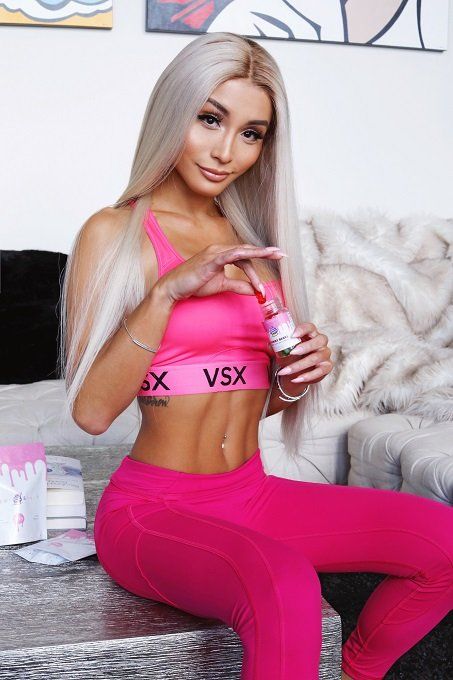 HOW SWEET IT IS: GETTING HAPPY WITH SUGAR & KUSH CBD 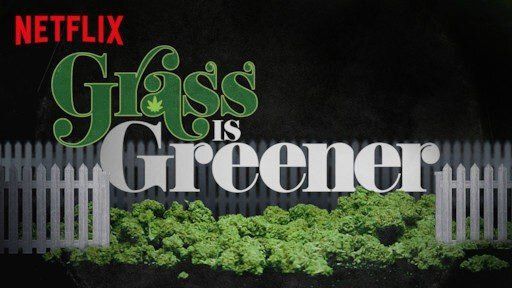