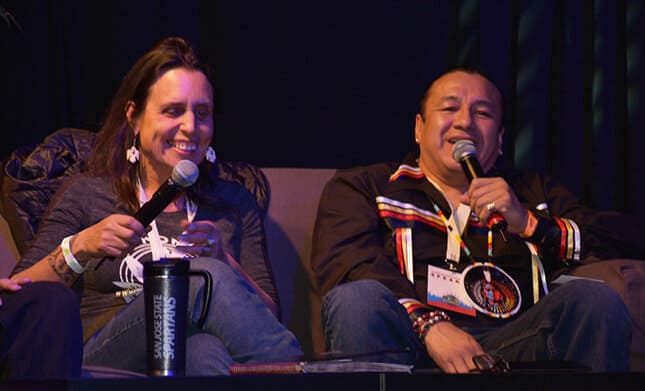 Remember Your Roots: Winona LaDuke Teaches Us to Honor the Earth With Hemp Advocacy

As we bid goodbye to Native American Heritage Month and look toward the holidays that remind us of peace on Earth for all people, we must take active steps to manifest that reality. While researching for our print issue ONE at NoCo Hemp Expo, the country’s largest industrial hemp conference, we were inspired by renowned environmentalist Winona LaDuke. She provided eye-opening insights into the importance of hemp as a tool for revitalizing both the planet and the Native economy. In understanding our duties to the Earth, we can better comprehend our responsibilities to each other, the universal connections we share. Here’s what we learned from LaDuke at NoCo’s 2018 Hemp Summit about the power of the plant, the fight against the Keystone XL Pipeline, and the path to a better future.

If we are to have a true regenerative economy, all people must have the opportunity to share in the wealth. Acclaimed environmental activist and former Vice Presidential candidate Winona LaDuke, executive director of the Native American advocacy organization Honor the Earth, exhorts the audience at NoCo’s Hemp Summit to be inclusive: “We want to be part of the next economy. I don’t want it just to look like you cool people; I want it to look like us cool people too… [When the money comes], we want to be at the table, not on the menu.”Since 1989 LaDuke has worked to achieve sustainability and reclaim tribal land through the White Earth Land Recovery Project (WELRP), a nonprofit organization operating out of the White Earth reservation in western Minnesota. Through WELRP she revives cultivation of traditional Native crops such as wild rice, but in recent years she’s added hemp to the mix, commenting that her area of Minnesota ran several hemp mills until the 1940s. “We know what a sustainable economy looks like,” she declares. “I want to bring something back to my region that makes sense for us.”LaDuke is fighting a war on two fronts right now, trying to promote the hemp revolution in her hometown and protesting the encroachment of Line 3 (also known as Keystone XL) of the Tar Sands Pipeline into her territory. This summer the Minnesota Public Utilities Commission rejected a motion to consider the impacts of the pipeline’s expansion on tribal culture, and on June 28 gave Enbridge Energy official approval for the line. The TransCanada Corp broke ground on Keystone XL in September 2018 near the Rosebud Sioux Reservation in South Dakota, despite lawsuits from three First Nation tribes – the Rosebud Sioux, the Fort Belknap Indian Community, and Gros Ventre – which claimed the Trump administration’s approval of the line violated the Fort Laramie Treaties of 1851 and 1868, making the pipeline’s construction illegal.In mid-November 2018, a federal judge in Montana blocked Keystone XL from its planned expansion through that state, as well as South Dakota and Nebraska. The judge’s ruling faulted the Trump administration’s approval of Line 3, saying that the State Department’s reversal of an Obama-era decision that denied the pipeline permission to expand was incomplete and lacked proper explanation. It remains to be seen how long the judicial blocking of the construction will hold, but it’s a good sign that opposition to Keystone XL could reverse the approvals given to Enbridge.

Activists across the region, from individuals to grassroots organizations to Native communities and allied groups, are prepared to combat the decision; with all the resistance efforts, LaDuke is optimistic the line will never be built. Still, the situation is far from resolved and the indigenous community suffering because of it. Past pipelines haven’t created jobs, only damaged both tribal lands and tribes further.According to LaDuke, her people’s best hope lies in a regenerative economy. But the citizens on the White Earth reservation need more training in farming hemp, and greater access to resources.“Share with us—bring us a supply chain!” LaDuke exclaims. “We need regenerative economy, because empire is not stable. The next economy needs to have us all working together.”–

**A version of this article appeared in print in Honeysuckle Magazine’s ONE, now available in Barnes & Noble locations nationwide! Find the store nearest to you through our Locator, purchase copies on our site here, through our app for iTunes here, or our Zinio digital storefront here. Stay tuned for the latest news from the hemp community, plus sustainability and planetary wellness updates from Team Honeysuckle!**