I don’t know what I was listening to in the mid-late 90s, but somehow missed a lot of the Riot Grrrl and Grunge era (save for some Nirvana, most likely due to a guy). Last week, when Bikini Kill returned to New York City for the first time in 20 years, performing at the Kings Theatre in Brooklyn, I was able to fill in some of that music knowledge. (Minus the baby-doll dress and dark lip liner).

The band: Vocalist Kathleen Hanna, Tobi Vail on drums, and bass player Kathi Wilcox, along with guitarist Erica Dawn Lyle– performed more than two dozen of their songs, including “Don’t Need You”, “Reject All American” and “For Tammy Rae”.

Unlike a lot of musicians, who just come out, play and say very little to the crowd, lead singer Hanna was funny and ferocious; yelling back at cheering audience members that “if people call me fucking riot mom one more time, I’m going to put you in a station wagon, drive you out to a field and leave you there!” And for good measure she added, “Just because I’m over 30 doesn’t mean I should want to [be a mom]!”

The quartet kicked things off with “Carnival” and blasted through their catalogue, with Vail as lead for some of the song and everyone having a go on the drums, over the evening. Hanna provided an encouraging and teachable moment when she shared the story of a poem she wrote at 17; saying, “Don’t throw the stuff away that you wrote as a kid. You could be a 50-year-old woman who’s still relating to stuff that happened years ago!”

On their last song before two encores, the band played “Rebel Girl” and were joined by the legendary musician, Joan Jett. Jett produced and contributed guitar and backing vocals to the single.

The thousands of Bikini Kill fans, who had been waiting a long time for this reunion, were audibly thrilled.  To be in their presence felt electric; It was easy to tell that their admirers’ were overjoyed that the band is together again. 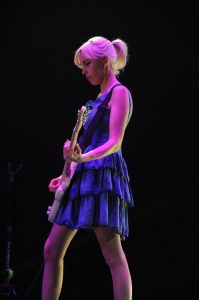 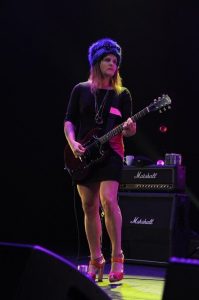 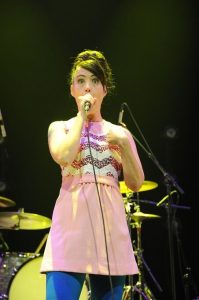 Find out what’s next with Bikini Kill by following @theebikinikill on Twitter. To snag tickets for their performance at Riot Fest, in Chicago; or see if they’re coming to a city near you, visit bikinikill.com.