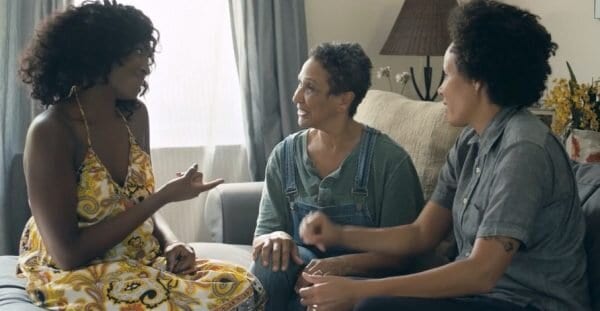 Robin Cloud’s short film, Out Again released in 2016, is a tale about Cat and Liz, a recently married lesbian couple visiting Cat’s parents to share the news. The driving question of the film is the one that is uttered by Cat within the first minute, when, about to arrive at Cat’s parent’s home, Cat blurts “What if my mom doesn’t remember me?”

The audience soon learns is that Cat’s mom June is living with Alzheimer’s and thus forgets that Cat is gay, leading to a microcosm of the normalized erasure of LGBTQIA+ identities. Upon their arrival, Cat and Liz are welcomed with confusion and dismay, as Cat’s father Gill asks Cat to hide under the guise of heterosexuality and to tell her mother that Liz is merely her roommate. Gill explains that he “just wants some peace” for the weekend and to avoid the excessive collateral distress that “coming out” typically produces.

In response, Cat disappointingly agrees to compromise her identity and her new marriage in the hopes of “keeping the peace.” This striking moment is a small encapsulation of how queer folks, in general, have been told time and time again that their very existence is a damper on “normal life,” and how being on the LGBTQIA+ spectrum unsettles and destabilizes any notion of heteronormative “peace.”

Once Cat informs Liz of the news that they must pretend to be straight, Liz is startled and appalled at the irony. The reason for their visit is to announce their marriage rather than to go back into a heterosexual closet. Yet, because of her love for Cat, Liz hesitantly agrees, and Cat responds with “it’ll be easier this way.”As Liz leans in for a kiss, June just so happens to be watching them, the facade of heterosexuality is spoiled.

Next, Cat, Liz, and Gill are seen having a roundtable discussion about how Cat must come out to her mother once again. Cat has a knee-jerk aversion to this, but ultimately, they decide that it is the best attempt at appeasing June. Liz makes an interesting intervention when she assures Cat that she will probably have to come out again and “probably again after that, like multiple times. You’re gonna have to come out to her for the rest of her life.”.

Hereafter, Cloud’s “Out Again” can be interpreted as a larger metaphor for the cyclical process of “coming out,” where the act of coming out is a lifelong journey and an evolving process rather than a one-time event. A queer person may even encounter having to come out to the same person twice, as Cat had to.

As she eventually “confesses” her sexuality and marriage status, June responds with micro-aggressive behavior laced with seemingly good and innocent intentions. For the rest of the film, she asks Cat and Liz intrusive and inappropriate questions. Hoping to make sense of Cat’s identity, she constantly tries to translate Cat’s queerness into a more understandable version of heteronormativity.

In order to process Cat’s coming out, June proceeds to bring up a past heterosexual high school relationship of Cat’s in order to dilute her queerness and make sense of it. June frustratingly sighs once her heterosexual proposal is rejected.

Later, June has trouble making sense of the dynamics of a lesbian marriage, where she is caught up in the binaries of man/woman, husband/wife, suit/dress. She disputes Cat and Liz’s positionality, as they try to explain that those binaries are irrelevant in their relationship. To June, Cat is “the man” and “the husband” because she wore a suit to the wedding, and Liz is “the woman” and “the wife” because she wore a dress.

Yet, June makes the most invasive and uncomfortable comment to Cat and Liz in the final scene of the film, which simultaneously left me exasperated and amused. Once Cat and Liz unmindfully make the announcement that Liz is pregnant, June excitedly responds by asking who the “lucky guy” is. Before the screen fades to black, we are left with a close up of Cat’s disappointed and mournful expression. In this moment, it is clear she understands that her relationship with her mother will be forever steeped in misunderstanding and erasure.

There is something interesting to say about these assumptions June makes and the universality of them, as the common underlying pressures of heterosexuality are constantly forced upon queer people’s bodies and identities. Though June has Alzheimer’s and exists on a non-linear timeline within her memories, there appears to be a residue of homophobia and heteronormativity that is deeply ingrained in her person. What does this say about the permeation of heteronormativity and the normalization of oppressive behavior towards marginalized folks? As June grapples with her daughter’s queerness, Cat grapples with queer trauma and makes sense of the fact that existing within her body means frequently occupying spaces that aren’t designed for or understanding of her.

Coming out is most certainly a lifelong process, as LGBTQIA+ folks are constantly encountering new individuals in different spaces and are faced with the decision to disclose their identities or not (and being straight or cis-passing is certainly a privilege in all spaces). Even on an interpersonal level, coming out to oneself can look like encountering new vocabulary or terminology that better fits the ways one identifies. Finding new ways to describe oneself can be a very powerful and intimate experience. Queer people and queer experiences aren’t interchangeable or uniform, and by destabilizing the notion of “normalcy,” LGBTQIA+ individuals make space their own. 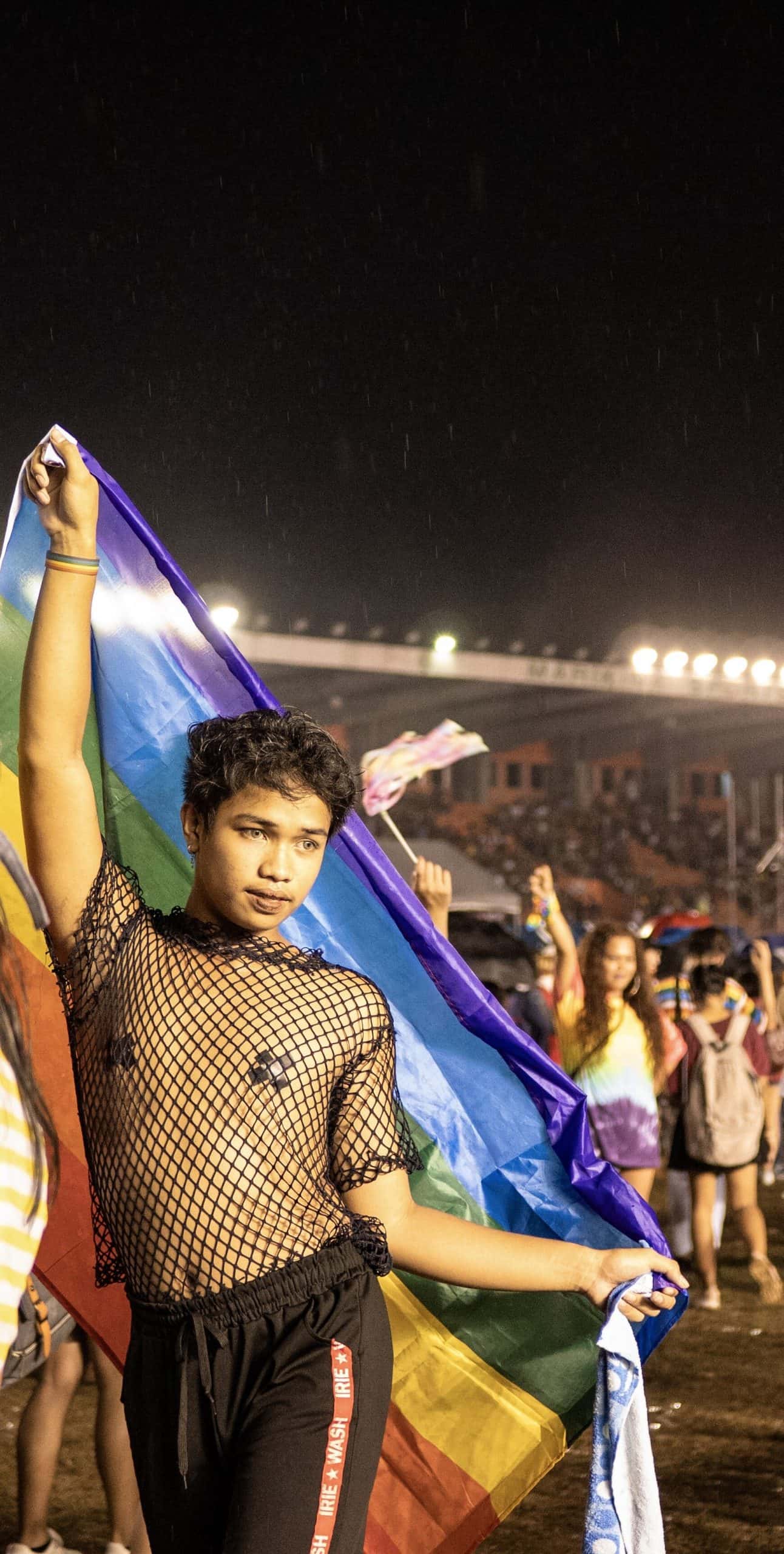 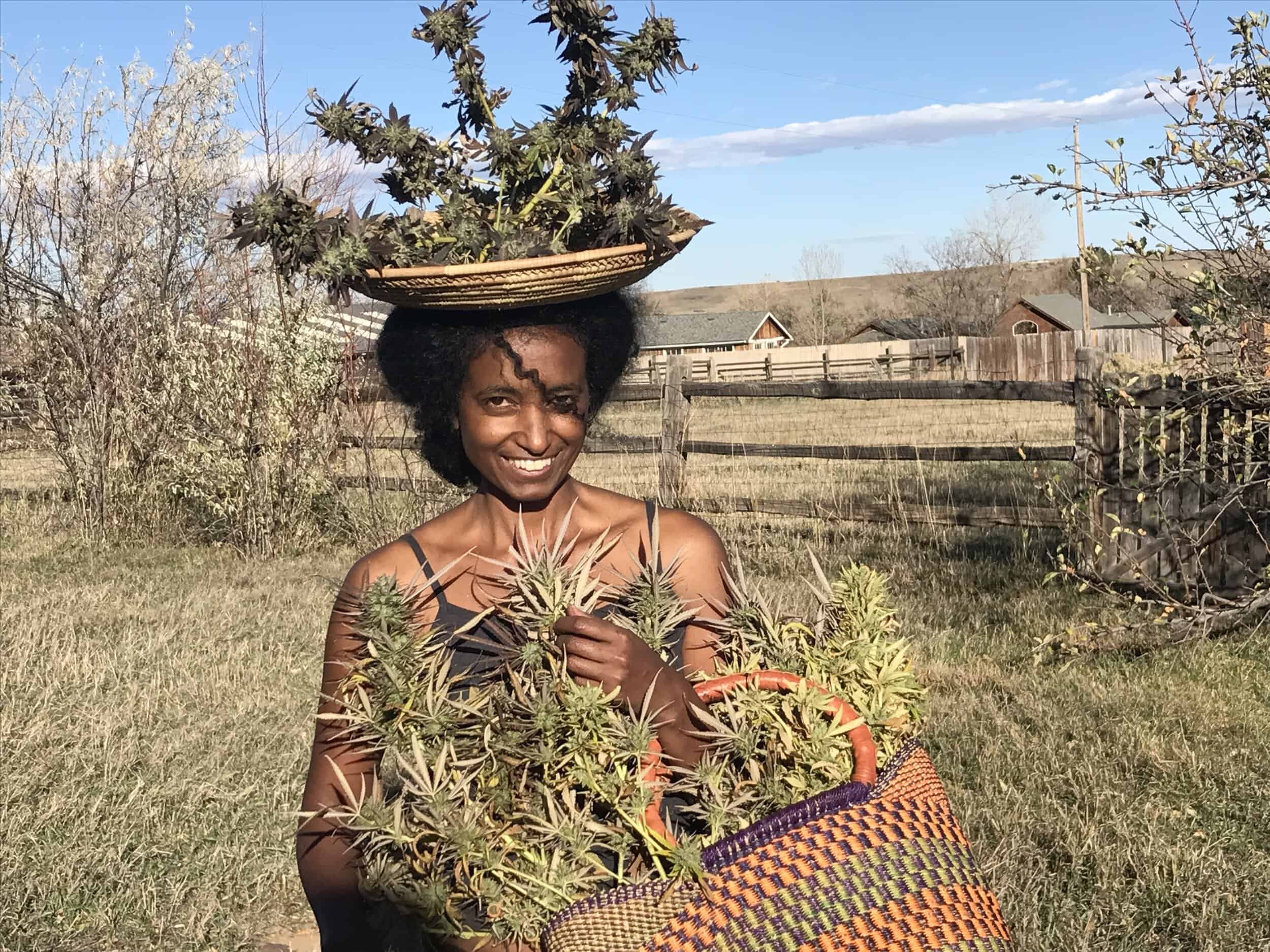