National Buffalo Day at the Smithsonian

This year’s National Bison Day celebration, at the Smithsonian Museum of the American Indian in New York, held special significance as Congress.

Traditional Buffalo Dance at the Smithsonian, New York from BLCK NEON on Vimeo.The bison have always been very important to the Native American people.“Bison were used for clothing, food, healing and represent unity in our mind and spirit,” said Ervin Carlson, ITBC President. “It’s a big part of our history and we were very connected to them.”

Buffalo remind the Indian people of a time when they lived free and in harmony with nature.When the ‘white-man’ recognized the reliance the tribes had on the buffalo in the 1800’s, they began systematically slaughtering the animals, killing over 60 million of them until only a few thousand were left.

Without the buffalo, the independent life of the Indian people was shattered.It’s said that the destruction of buffalo herds and associated devastation to the tribes, disrupted their independent lifestyle more than all other federal policies and broken treaties to date.People began to realize that that by reintroducing buffalo to tribal lands they would help heal the spirit of the tribes and that of the mammal. They formed the InterTribal Bison Cooperative in 1990 to assist tribes in returning the buffalo to Indian country, aka the United States.Currently, ITBC has a membership of 58 tribes in 19 states with a collective herd of over 15,000 buffalo.November 20 at the Smithsonian, Carlson stressed his enthusiasm about the importance of working in unity with other national organizations (both white and red) in establishing healthy buffalo populations on tribal lands. He also expressed his passion in resurging some of broken cultural, linguistic, dietary, holistic and spiritual knowledge of the Indian people.  Turns out bison are very nutritious, being a leaner meat than even chicken breast.  The council hopes to introduce the meat into fast food chains and school cafeterias.President Obama signed the National Bison Legacy Act on May 9.  Learn more at www.nationalmammal.org 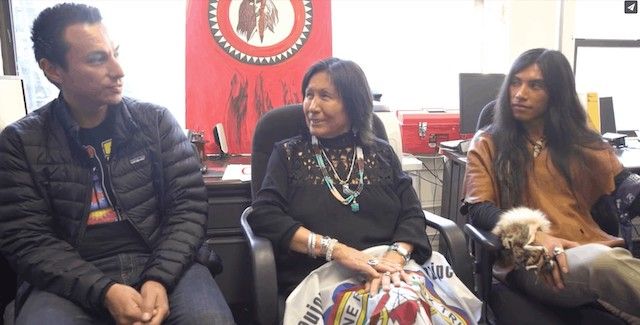 Blck Neon Thanksgiving: Cheryl Dupris talks with Sheldon Raymore and Sparrowhawk on their recent trip to Standing Rock and gems of preserving American

Dear Lori: At a time of such pluralism, division and hate, how does one 'love their enemies?'