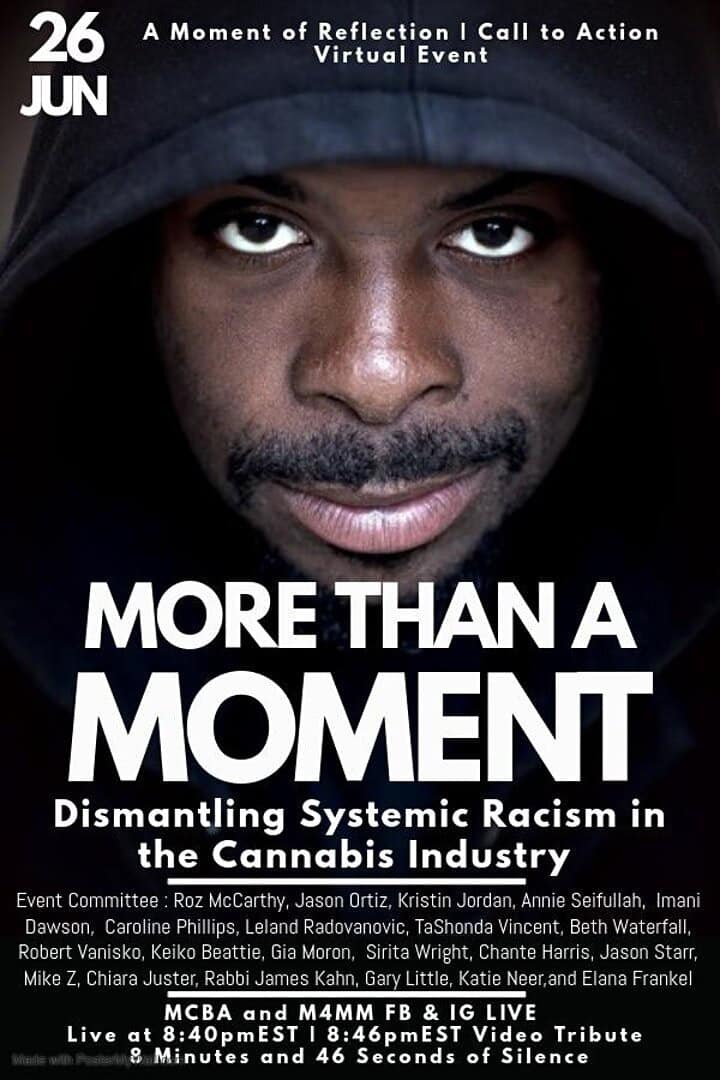 More Than a Moment: Dismantling Systemic Racism in the Cannabis Industry

On Friday, June 26,  Minorities for Medical Marijuana (M4MM), held a virtual event titled: More Than A Moment: Dismantling Systemic Racism in the Cannabis Industry. The event was hosted by Roz McCarthy, Founder and CEO of M4MM, and brought speakers from all areas within the cannabis space to discuss the need for change within the industry today as well as steps for tackling these issues.

The event opened with a large stopwatch, which read 8 minutes and 46 seconds, the same amount of time that George Floyd was held on the ground with a police officer’s knee pressing on his neck. As the clock began to tick music played, and videos and images of protestors fighting for Black lives filled the screen. The video ended with a slideshow of a few names of those killed due to police brutality, recognizing George Floyd, Breonna Taylor, Ahmaud Arbery, amongst many others. McCarthy commenced the evening with the statement that if that video doesn’t inspire rage and a need for change, then nothing else would.

The first speaker was Brandon Wyatt of Minority Cannabis Business Association (MCBA). Wyatt stated, “Civil rights and business [go] hand in hand,” acknowledging the need for businesses to take these issues seriously and enact change in the ways they operate.

The next speaker was Erik Range, Board Chair of M4MM. Range explained the many ways in which racism is pervasive within the cannabis industry. Range emphasized that since the cannabis space is still being built, there is an opportunity within such a young industry to create this much-needed change. “We know for a fact what this industry can be,” Range added. “Black and Brown folks have been allies of so many different movements. We’ve been allies of the United States itself when we fought wars abroad, to immigrants, women, the LBGTQ community…we have been allies to almost every community that exists, and now it’s time for people to step up and be our ally.”

The allyship Range referred to is about a specific and empowered level of partnership that is absent in the industry. Range emphasized that the goal of partnership and allyship should not “make us charity cases. We don’t need one-off events, [we need] true partners. We need someone to add value to our community the ways we add value to their communities.”

The next speakers were Think BIG’s CJ Wallace and Willie Mack. Think BIG is a company that values the healing properties of cannabis and actively fights for not only its legalization but also social justice reform through cannabis. CJ Wallace, the son of the late great Christopher George Latore Wallace, also known as The Notorious B.I.G., spoke about his entrance into the industry and how it entailed figuring out a way to honor his father’s legacy without using his image as solely a marketing strategy. He explained that there has been a lot of trial and error in his navigation of the industry but stayed focused on his belief in the power of cannabis. He explained that it can be used as “more than just a way to relax, but as a healing tool.”

Mack then described the challenges they faced in building their company, a company committed to prioritizing social equity, “We’re not just a cannabis company, we have a mission that we’re fighting for.” Mack explained that there are many companies who create a facade of diversity but are not actually investing in Black companies or Black communities. Mack explains how, they often had to cut ties with suppliers and those, who “don’t understand the larger vision.” Lastly, they discussed the potential reach of the cannabis industry, especially for young creatives or entrepreneurs. Mack added that entering the cannabis industry is about finding, “what you already know that you’re good at and weaving that into the cannabis space.” Whether it’s law, photography, fashion, graphic design, etc., there is space in the cannabis industry for all talents.

Roz McCarthy then proceeded to play a video of three different individuals sharing their stories as they related to cannabis. One of the stories was of Bernard Noble, a man born and raised in New Orleans, Louisiana, who was arrested in 2010 for carrying what he described as $5 worth of marijuana. Noble was sentenced to 14 years in prison. In an emotional retelling of his story, Noble, a single father, shared his experience of being sentenced to 8.5 years for simple possession, addressing the racism and unjust laws that have taken his freedom. Noble advocated for the decriminalization of non-violent charges and the de-stigmatization of marijuana across the United States.

Next, we heard from Dr. Oludare Odumosu, CEO of global cannabis company Zelira Therapeutics Ltd. As an executive in the cannabis industry, Dr. Odumosu discussed the lack of Black representation within the space and the dire need for immediate change. Dr. Odumosu asked, “Where is the Black man? Where is the Black woman? Where are the people of color…in the cannabis industry?” He continued, “How do we discuss systemic racism in the cannabis space when, [looking around here today], there are few people who look like me?” In an empowering call to action, Dr. Odumosu ended his address with, “We can do more, and I am committed to that.”

Kim Rivers, CEO of Trulieve, addressed the need within the industry to lift up communities and foster more diverse and inclusive work environments. Rivers stated that Trulieve is arguably the most profitable company in the cannabis space and credited this to their commitment to diverse perspectives. Trulieve has reached 3000 employees, 40% of which Rivers said are minorities. She explained how she uses phone interviews to allow potential employees to explain who they are and what they will bring to the table as a tactic to eliminate bias in the hiring process. Rivers said that Trulieve has made a commitment to “make purposeful and intentional decisions about who’s around the table.” Even still, Rivers maintains that there is always more that can be done. She explained that her current action items include bringing more people of color into the boardroom, increasing initiative tracking and transparency, and providing more access to capital for those who “haven’t had the opportunity to have a seat at the table.” Rivers pledged to use her expertise to continue to pave the way for other businesses in the industry and lift up minority communities through mentorship and investment.

Next, Dr. Rachel Knox, Cannabinoid medicine specialist and Board member of MCBA, went through a detailed action list of concrete initiatives to be taken in the cannabis industry. Some of the action items Dr. Knox addressed included: assigning Black and Brown writers to cover stories outside of topics such as diversity and inclusion, inviting Black media outlets to participate in medical and science conferences, eliminating the tokenization of Black employees or businesses, hiring more people of color in marketing roles and C-Suite positions that go beyond diversity consultants, ending the “culture vulture” tendency, recruiting from HBCU’s, hiring formerly incarcerated individuals, sponsoring mentorship programs, sharing resources, attending lobby and government meetings to push equity centric bills, recruiting thought leaders, etc. Dr. Knox also clarified that simply advocating for “social equity” is not enough, there needs to be a focus on “health equity” which she divided into “social, economic, human, and environmental equity.”

Dr. Knox added, “Achieving equity through cannabis is much more than creating opportunities for people of color in the cannabis industry…Cannabis was wielded as a weapon against communities that disrupted those communities.” Dr. Knox demanded that we, “move from weaponization to assetization and leverage this plant to heal our communities,” as a means of addressing a history of exclusion and oppression.

These conversations are simply the starting point of addressing the deeply rooted issue of systemic racism across many industries in the United States and worldwide. In the ever-expanding and increasingly lucrative cannabis industry, there is a duty and responsibility to acknowledge the pain and suffering that Black and Brown communities have disproportionately endured because of the illegal status of marijuana. These social equity programs are crucial in building a more fair and sustainable industry. As was repeated throughout the event, #WeCanDoMore to fight the inequity within the industry, and this awareness needs to extend beyond the current climate but into the future because it is #MoreThanAMoment.

A complete recording of the discussion can be accessed here. For additional information and resources, visit M4MM and MCBA’s websites. 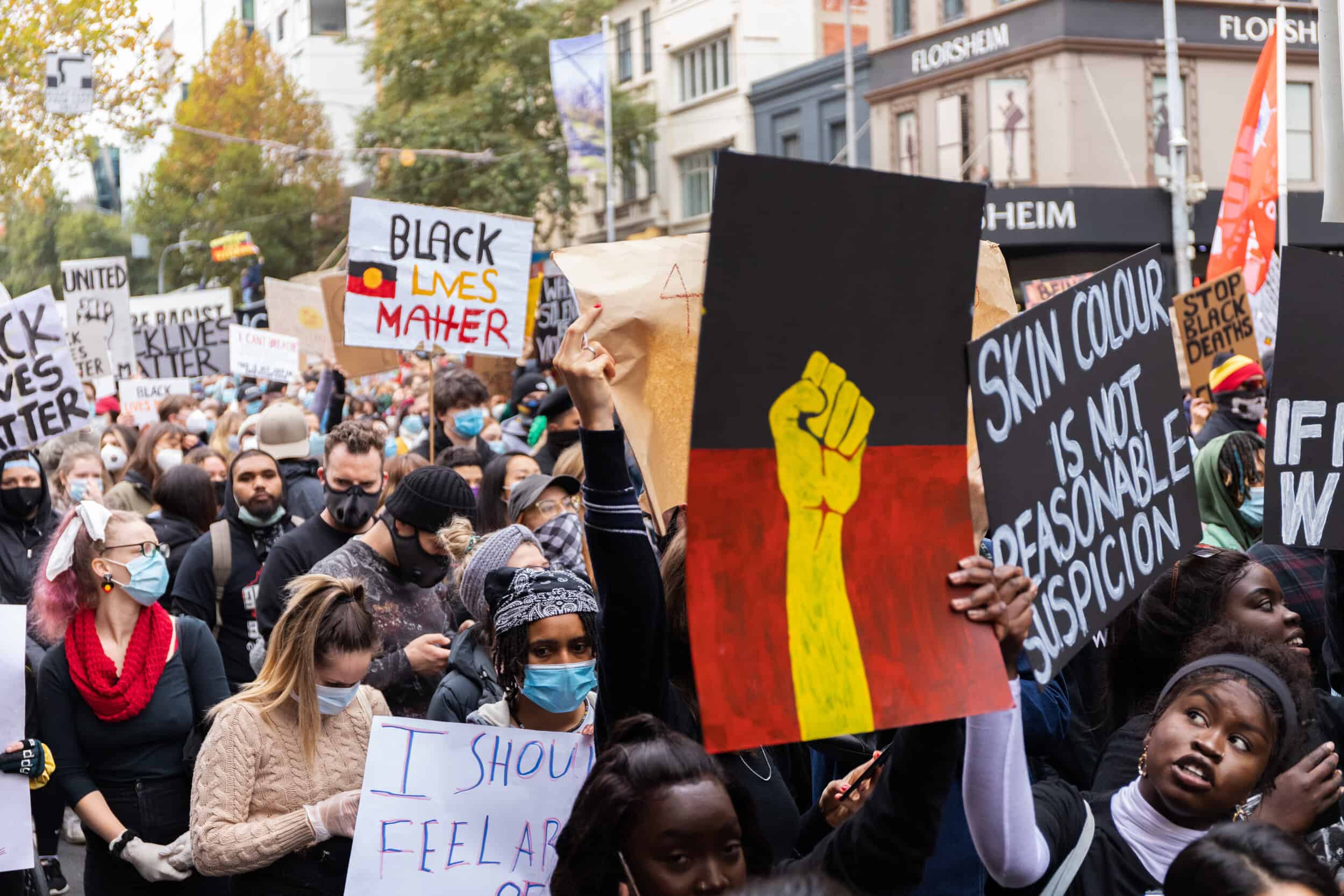 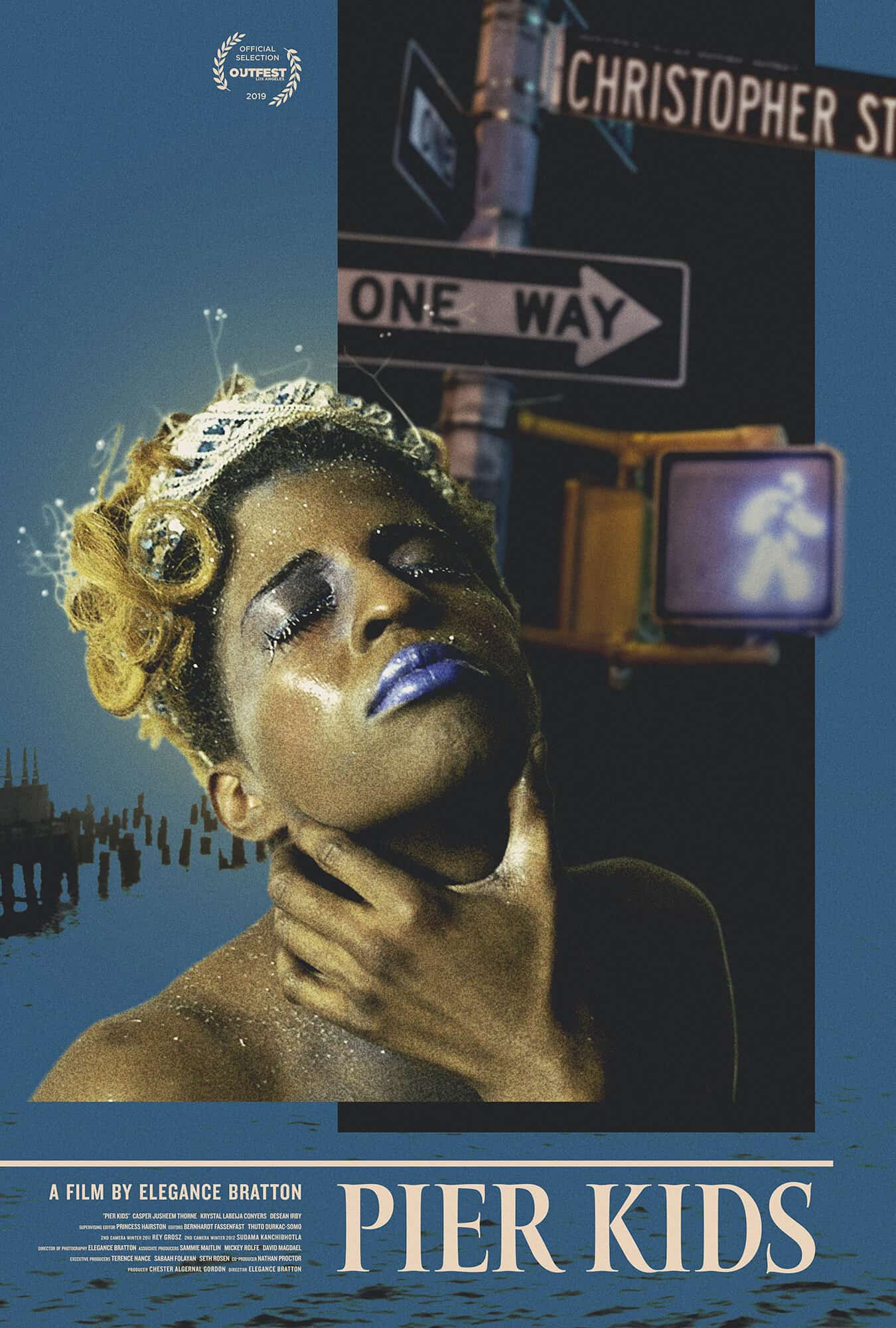