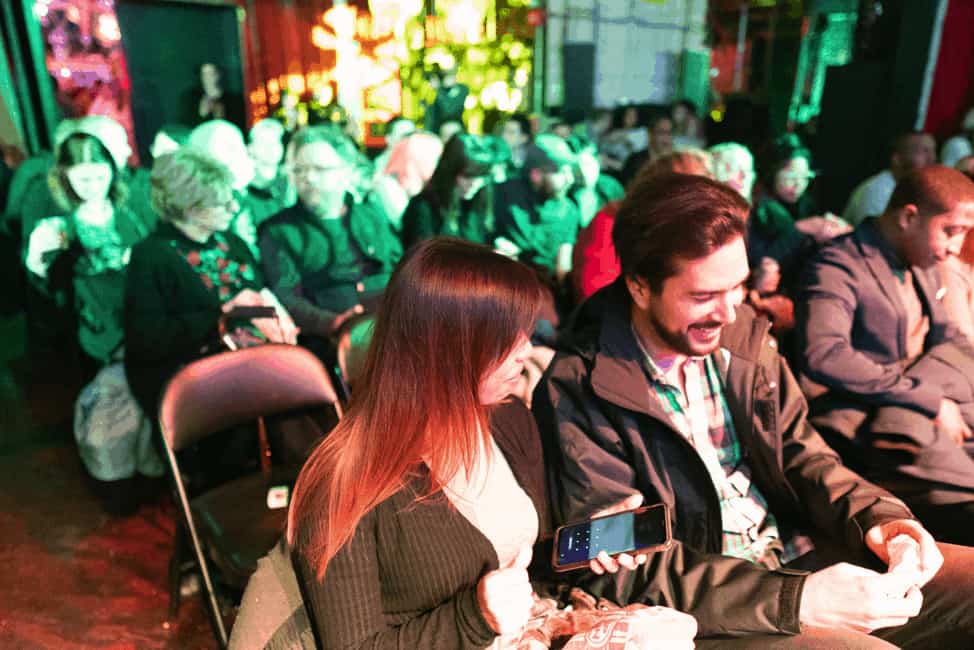 High NY Cannabis Film Festival was inspired by [Mike Z.'s] friends who like to blaze before going to the movies

Everyone from the industry and beyond gathered at House of Yes last Sunday to partake in the High NY Cannabis Film Festival.

I was able to catch up with Mike Z., founder of High NY, who told us that he does not have a favorite film, but that this festival was inspired by his friends who like to blaze before going to the movies. He wanted to showcase the different perspectives of those working in the cannabis industry in a serious way, a departure from their often comical representation (see Cheech and Chong). Of course, when we asked what’s next for High NY, Mike told us to stay tuned: bigger and better things are on the horizon!

The Feature Film, One Bedroom, is the winner of various awards at The Las Vegas Black Film Festival, Manhattan Film Festival, London Independent Film Awards, and New Voices in Black Cinema, and it focuses on a 30-something African American couple’s five-year tumultuous relationship. It is honest, ugly, beautiful, and sad, just like real life.

I asked the couple next to me their thoughts on the film:

@Sweetzbysadia: “I liked the time-line style that showed that they broke up already, it captured the true essence of what a real life relationship is.”

@Buddhachief420: cited his favorite element as, “The story line and comic relief of the friends.”

We were in agreement that all in all, One Bedroom is an excellent film.

Later, I ran into David Leigh, the director of the 2018 documentary Bodega?. In the film, David showcases the hypocrisy of people who inhabit and contribute to newly gentrifying neighborhoods. For instance, one character pines for her bodega, lamenting how she will miss it; however, when David asks her where she gets her dog food, she confesses that she orders it online. The film also touches on the disappearance of bodegas and the negative repercussions this has in the community. David stresses bodegas as a pillars of the community, serving as makeshift childcare, credit providers, and community centers.  I left with an impression of Bodega? as a funny, eye opening, and very clever inroad to address gentrification.

One of the highlights from this year’s festival was the strong female presence. Winner of Best Series, High Herstory is a comedy series from Mercury Road Media that highlights the stories of historical female figures told by comediennes and cannabis content creators. Jenny Joslin explains its inception: “We love ‘Drunk History’ but noticed that the majority of the stories, just like the history books, featured men. Our team (Kendall Watkins, Annette Mia Flores and myself) are big history buffs and strive to tell unexamined tales of women in our other, more serious, projects… The stories of women have largely been left out of the historical dialogue and we wanted to shed some light and help tell more inclusive versions of history.” In addition, this series is a key part of sweeping cannabis culture rebranding, stressing that cannabis use is only a part of the industry’s equation, as opposed to the whole. Educated, eloquent, and striking women talking about history’s most influential female figures is yet another incredible boon for cannabis culture. For more, visit High Herstory.

This event and events like it are vital to the cannabis community and the future of cannabis culture. Through a diverse set of content, NYCFF 2019 highlighted the many nuances of this multifaceted industry, which otherwise would have remained a mystery to many. We can’t wait to see what’s next for Mike Z. and the High NY team!

Jackie C. is a creative and digital marketer based in the New York City area. She enjoys great music, new travels, nice people, and cat videos. Visit lightverde.com or follow her on Instagram at @light.verde.

Andy Murray gets Hip to Surgery