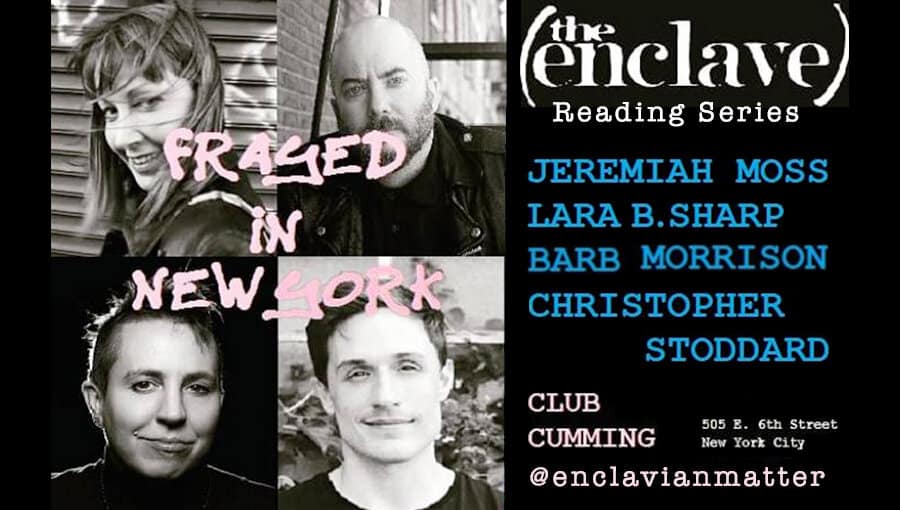 “I was so fucking depressed last night,” emcee Brooks said, referring to another hell week with the GOP’s spoiled toddler. Not The Orange Swamp Thing, the other entitled white baby in a suit, Brett Kavanaugh, the sobbing, blubbering, self-pitying Supreme Court nominee.Brooks got huge laughs with a funny bit about the Unabomber, and talked about the night before the Enclave reading.”Friday night…I decided to drown my tears and indulge myself in a twink…the magic of an iPhone app is this guy shows up, 22, cute as fuck, and, you know, huge. He had a reckless quality which I find attractive in a twink.”Unfortunately, the young hottie ruined the action in the middle of it by calling out, Daddy!“Being called Daddy during sex,” said Brooks, “is the gay equivalent of finding a fly in your soup at a fancy restaurant. You go from, this is gonna be good, right? — to what the fuck?”I laughed so hard I nearly choked on my seltzer.

Jeremiah Moss, the man behind the award-winning blog and book, VANISHING NEW YORK read about what’s gone. It was apt for me. As I’d ambled past Tompkins Square Park on the way to the club, the recurring stab of sadness got me in the gut. My native Manhattan looks nothing like it did and often feels like an empty town filled with ghosts.

In the 80s, whenever I was hit with an emergency need for drugs at 3am, it was that park that beckoned, luring me toward Alphabet City. It was a suicide mission back then. Being an ex-junkie, though, it’s not surprising that my wasted ideas always made perfect sense. The coils of my head kick off a Pavlov’s dog-inspired rush of endorphins that leaves me drooling at memories from years of debauchery.Moss at the mic lamented his arrival to what he refers to as the end of New York City: 1993. He was 22 then.

Moss read, “I was Harold and New York, my Maude.” He openly admits his bias and lack of objectivity in his signature prose. Self-deprecating words inspired laughs from the audience but the biggest howl came when he quoted reviewers: “The New York Times called me a curmudgeon with a penchant for apocalyptic bombast” and “The Daily News dubbed me a fetishist for filth.”

DO THE HUSTLE is Lara B. Sharp‘s memoir-in progress. It’s about being raised in New York City’s foster care system and her exploits as a crustie and grifter. She chose a chapter that is set in 1984 and appropriately titled Gypsies, Tramps and Thieves. “A crustie,” Sharp explained, “is a homeless runaway, living on the streets of downtown Manhattan.”

Sharp as a Whipped Crustie

The author opens by telling the audience a little background info.”I was 14 years old and I ran away from foster care. I’m just kind of living in Washington Square Park because that was a done thing then…My mom was an alcoholic and a drug addict…but [she was] awesome because she taught me everything I needed to know. She taught me how to lie, cheat, and steal.”In addition to writing, Sharp has performed in a number of theater productions, including Penny Arcade’s original production of the Sex and Censorship Show, BITCH! DYKE! FAGHAG! WHORE! Sharp’s author reading was a performance piece because she’s charismatic and naturally theatrical.

She nailed the accents for the scene’s two characters. One voice is Sharp at age 14. The other is “Gay Cher.” He is her new kinda-sorta mentor who tells the young Sharp that he can easily make her look 18 if she steals beauty products from Duane Reade. The motivation behind wanting to look older, was practical. She wanted to find a job.Sharp reads in Gay Cher’s midwestern accent: “I’m the most beautiful, half-Mexican faggot boy ever to escape Kansas. I looked like a fat old milk cow, but not no more. And, honey, I can fix you up. I mean, you’re a mess. But, I have talents. No offense but your white eyelashes are disgusting.”Huge laughs from the crowd.Then, narrating in her younger self’s voice: “He scratches his left arm making the needle sores bleed. He rubs the blood into his stone wash cut-offs…. He yanks my scrunchie and runs his dirty fingernails through my long blonde hair, pulling at the matted sections.”More of Sharp’s prose can be found here. I quit drinking, drugging and smoking, but I can’t get enough of Sharp’s writing. Saturday night’s performance proved that I’m addicted to her prose.

Click here for more of my Enclave Reading pics

I chatted with Barb Morrison. Yes, THE Barb Morrison—recording artist, hit songwriter, platinum and gold records producer. Morrison has played with Blondie, The Runaways, Johnny Thunders and plenty more biggies. Morrison’s pronoun is they. They told me they grew up in the East Village and Chelsea after arriving here at 17. They came to the city after a childhood in Albany.”Did you runaway?” I asked (spontaneously) because I had. At 15, I moved into the Hotel Earle on Waverly (now, Washington Square Hotel). It was only one block from the park I’d fallen in love with. I found it romantic that Joan Baez sang about Bob Dylan smiling out of the window of that crummy hotel over Washington Square.”Yeah, I ran away many times,” Morrison said. They laughed. “I disappeared into the city. You’ll hear all about it when I read.”Reading from a memoir-in-progress, Morrison talked about being a squatter and a musician on her way up and joining a band called The Loveless. “I tried out a few bands but none of them fit the way this gang of misfit rebels fit me…. I wanted to get in bar brawls with my guys and wake up the next morning not knowing which bruise was for what reason.”The band had their first show at the underground Lismar Lounge. “You had to enter through one of those gates in the sidewalk that went down into a basement. Most of the bands on the Lower East Side couldn’t play worth shit and we actually had some good songs, so we instantly gained a following the night of our first gig. I remember pushing our amps up First Avenue after that show. Someone rode past in a cab and yelled “LUHHHHHVVVV LESSSSSSSSSS!” at us. We were too broke to take a cab but we felt like the most famous rockstars on the planet that night.”

Author Christopher Stoddard read from his new book (AT NIGHT ONLY). His words were about the universal feeling of yearning for an ex to come back and convincing yourself that just by wanting it, you can make it so. Max, his dog, is also an important character in the chapter.”I’m wondering what he’s doing right now….He didn’t text from Montreal to let me know he landed safely—like he did when we were still in a relationship.” Then he describes pulling out his iPhone to contact his ex. The foreshadowing makes it clear that is always a bad, bad, bad idea. Stoddard’s voice is easy to listen to and, yes, his was one of the hot bodies I had referred to in my second sentence of this recap.

Despite a packed room, Alissa Brianna, the solo bartender for the evening, breezed through the night and looked calm and poised amidst the madness. She banged out those drinks—which I was told were fantastique!

Lauren Pine, downtown debutante and horse, as in horse trainer and horseback rider, not to be confused with old slang for heroin. Glad we cleared that up. Pine, Morrison and Sharp are alumnae of the Don Hill’s Thursday night Squeezebox Parties and have known each other for 30 years.

Melody Jane, danced in Penny Arcade’s 2018 BITCH! DYKE! FAGHAG! WHORE! at Performance Space New YorkElizabeth Collins, writer and comedian (RAISED BY GAYS AND TURNED OUT OK!)Clayre Saxon Morrison, British fashion stylist and photographerSteve Zehentner, stage designer and sound designer who has collaborated with theater artist, writer and performer Penny Arcade for 30 years. One of their collaborations was the Lower East Side Biography Project — if you’ve never experienced it, I recommend clicking on that link.Gavin Van Vlack, guitar, bass and vocals and member of the bands Canonized and BurnLiza Béar, artist, photographer, writer, filmmakerAlbie Mitchell, well-known downtown photographer who documented the East Village for over 40 years, and worked for the Village Voice and for the original production of Penny Arcade’s BITCH! DYKE! FAGHAG! WHORE! at PS122 and the Village Gate.Jenny Gorman, practicing fine art and photography in New York City and the Hamptons for over 25 years.Sean Harris, artist, whose works in paper collage and mixed media can be viewed on Instagram @seansheengram.

JEREMIAH MOSS, creator of the award-winning blog Vanishing New York, is the pen name of Griffin Hansbury. His writing on the city has appeared in the New York Times, the New York Daily News, and online for The New Yorker and The Paris Review. As Hansbury, he is the author of The Nostalgist, a novel, and works as a psychoanalyst in private practice in New York City

LARA B. SHARP’s writing has appeared in print and online publications, including Longreads and Teen Vogue.

When she was reading Rebecca Solnit’s book, Men Explain Things to Me. Sharp is a native New Yorker who has written for and performed in a number of national and international theatre productions and live storytelling events in New York City, London, and Philadelphia. She was an original member of Penny Arcade’s BITCH! DYKE! FAGHAG! WHORE! in the early 90s and toured with Penny Arcade. Sharp earned her BA from Smith College, where she was an Ada Comstock fellow, and is working on a memoir about her childhood in the New York foster care system.

BARB MORRISON is a musician and producer who uses music as a platform of advocacy for the transgender community. A regular performer at The Ritz and CBGB’s, they were the saxophonist, guitarist and singer for the bands Gutterboy and Itchy Trigger Finger, which were signed to Mecury Records and toured with Lollapalooza in 1999. Barb has co-written and produced songs for artists such as Blondie, Rufus Wainwright, LP, and Franz Ferdinand. They also wrote the scores for films, including The Safety of Objects (2000), which starred Glenn Close. Their writing has appeared in various publications, such as the New York Times and The Good Men Project. Currently, they are at work on their memoir.CHRISTOPHER STODDARD’s new novel At Night Only from Itna Press released this June, which has been praised by The Paris Review, Kirkus, Slate, Lambda Literary, and authors Edmund White and Gary Indiana. Featured in OUT Magazine’s “Tastemakers” issue in 2015 for his contributions to literature and publishing, he’s written two other novels: Limiters (Itna Press, 2014), and White, Christian (Spuyten Duyvil, 2010). He lives in Brooklyn, New York.– 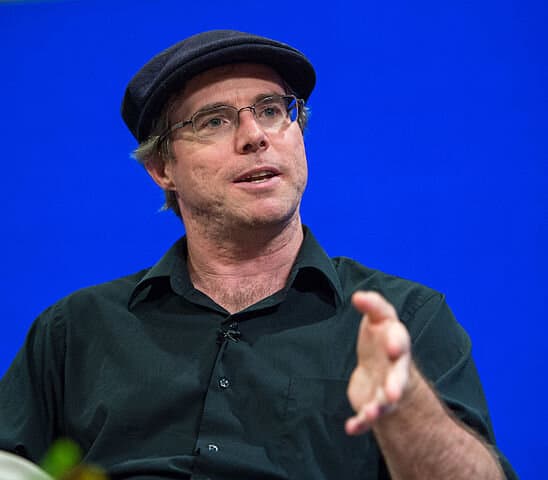 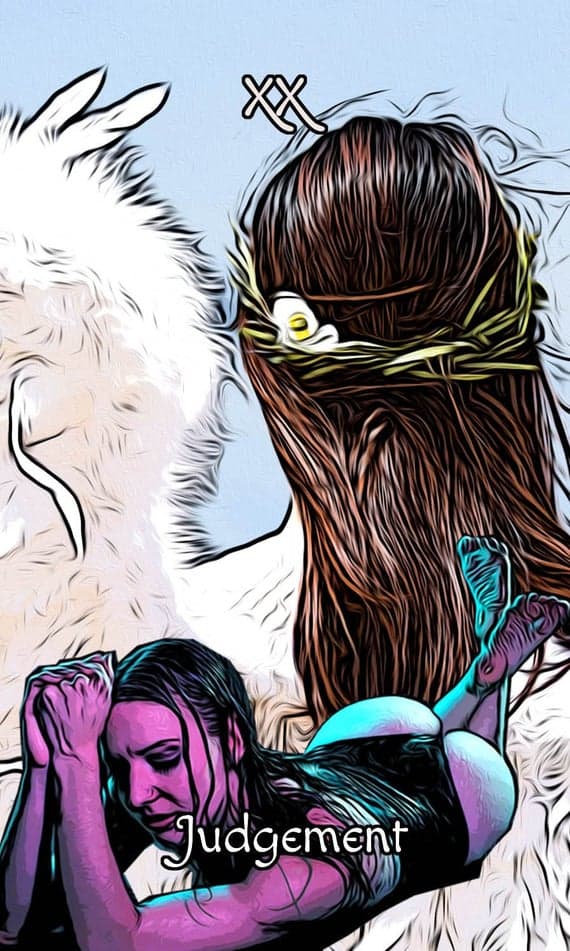