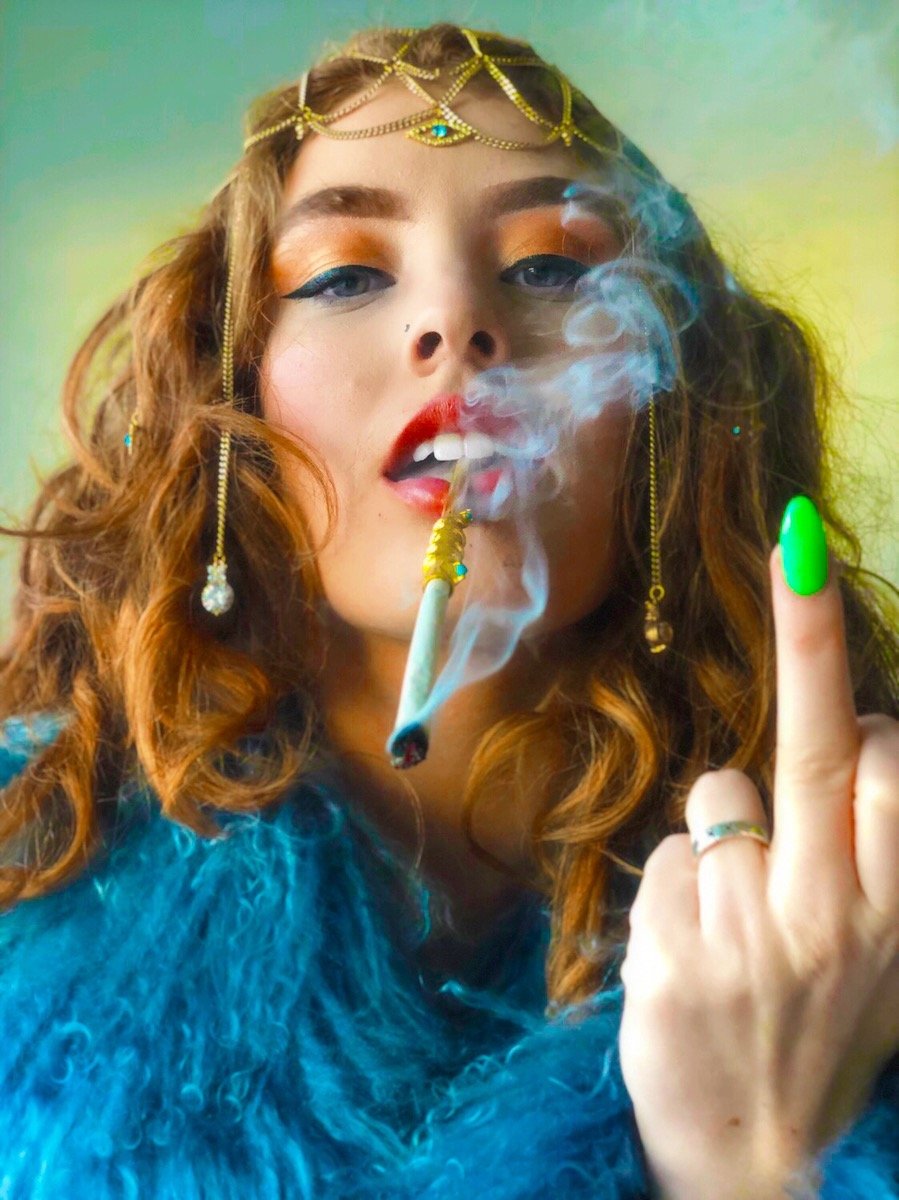 The queer, multimedia artist has become an icon, both within and beyond the cannabis world. Cannabis culture is a key aspect of Eizen’s aesthetic; her works often incorporate quintessential tones of 60s psychedelic transmutational iconography. The origin point of Eizen’s creativity and her artistic process are linked to the spirituality of the plant and the dimensions it enables her to access.

“Using cannabis makes me feel like I am not restricted to one medium. Cannabis turns my artistic process into play — it enables me to channel my natural instincts. I often start with a painting or a photoshoot and blend them together.

The psychedelic aspects of my work express a certain kind of freedom, but my work is also about presence. When I paint, I go into a stream of consciousness mode. I defocus my eyes and let the flow take over. Cannabis helps his process.”For Eizen, her passion for cannabis extends beyond just usage and aesthetic, she is a strong plant medicine advocate who believes in the boundless potential and healing properties of marijuana. Eizen is also deeply committed to promulgating social justice and equity, especially for LGBTQ individuals and people of color.

Eizen’s commitment to activism is a pioneering force that manifests itself both in her work and in her life. The queer artist initially struggled to find a space that allowed her to express her values of justice and freedom.

“I grew up in Los Angeles, and I went to school in Washington DC for political science because I was really interested in activism, feminism and social justice. However, when I moved to DC, I was overcome with this feeling of depression. The campus culture was really conservative and conformist. The vibe just didn’t resonate with me.”

Eizen eventually left campus and returned to Los Angeles in order to pave her own path. Cannabis helped her come to terms with the decision, while also reigniting her creativity. She began bud-tending at dispensaries. As she began to explore the world of cannabis, she was astounded and enlivened by its medicinal potential and environmental possibilities.

“Cannabis is medicine; I personally have used cannabis as medicine for anxiety for depression as well as creativity. As a budtender, I witnessed the benefits cannabis can bring to people with conditions like PTSD, pain, cancer, and other ailments. What’s clear is that cannabis is a healing plant. The uses of hemp in terms of materials and sustainability are also immense.”

Eizen holds a deep, esoteric connection with the plant. While bud-tending, she felt that the heart and vitality of the movement had been lost in the processes of legalization and commodification.

As it turned out, Eizen possessed the creative serum that the cannabis industry needed. While bud-tending, she began managing the social media platform of the dispensary, acting as creative director and visionary, breathing life back into the landscape.

Eizen focused on showcasing cannabis and cultivating a sophisticated and gorgeously feminine online presence. Soon after, Eizen became sought after and began freelancing for other dispensaries and cannabis brands, while also creating her own art. 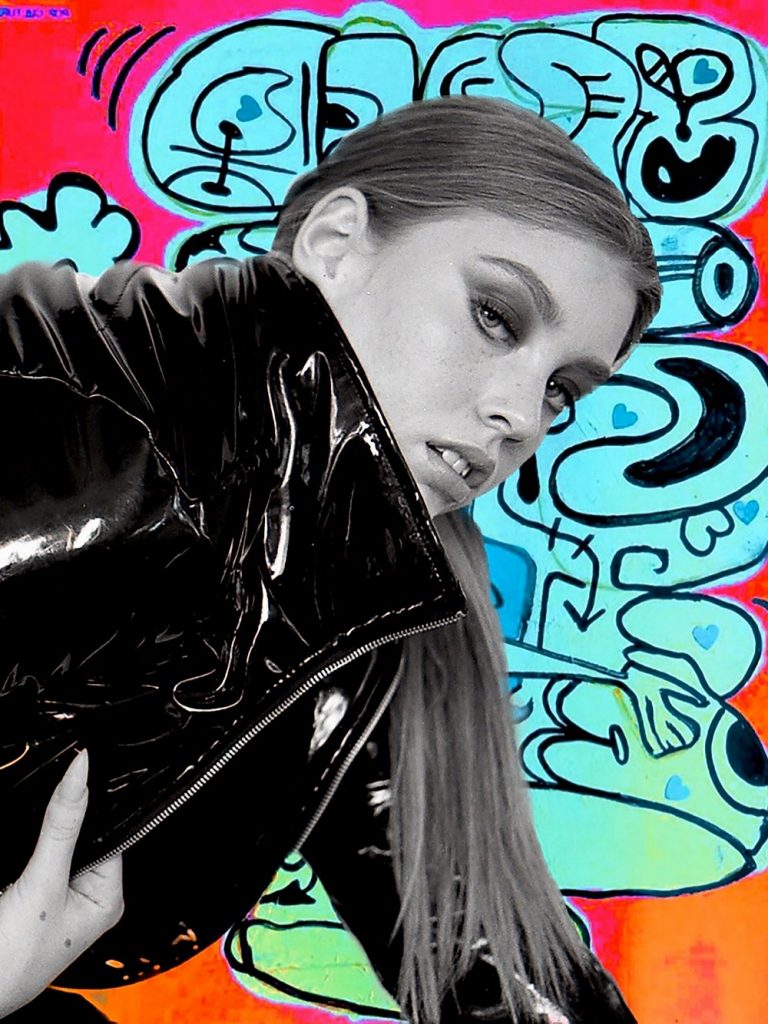 Today, through her tenacity and the sheer force of her creative vision, Eizen is highly successful, working with multiple different brands. Ever conscientious, Eizen remains committed to using her success and her platform to assist minorities and marginalized folks looking to break into the cannabis scene.

“I feel like I’ve reached a place in my career where I can incorporate social justice and activism; The creative energy we bring to these projects should be combined with a justice-oriented ethic.”

Eizen is conscious of the deadly triage formed by the prohibition of cannabis, war on drugs, and the system of incarceration that perpetuated the oppression of communities of color, especially Black communities.

“The war on drugs has adversely affected mostly Black and brown cannabis users and literally upheld modern slavery in this country through the prison industrial complex. We really need to repair the years of oppression that we are now profiting from.”

Eizen, like so many others across the nation, has been horrified by instances of police brutality and the blatant institutional disregard for Black lives.

“I’ve been working with the city council of my predominantly white Los Angeles neighborhood. They are so out of touch with [issues of police brutality]. I got them to pass a motion to have a community Forum about you know with our town’s police department and their practices and talk about budgets. While I have been working on my own artistic projects, lately, my focus has been political.

I think the cannabis industry has its own reckoning. It is predominantly white male-owned, there are very few Black or POC people who have licenses, especially in California.”

The cannabis industry has pervasive and well-documented issues with representation and diversity. According to a 2018 study by Marijuana Business Daily, more than 80% of Marijuana business owners and founders are white. Marijuana licensing costs are exponentially high and act as a prohibitive factor for minorities, particularly for Black communities adversely affected by prohibition.

As legalization takes off in several different states and the stigma associated with the plant is slowly dismantled, there is a dire need for combining the profitability of the industry with redistribution of wealth. Without enacting measures that foster social equity, there is a danger that legalization will only reinforce existing racial socioeconomic and racial disparities.

For cannabis especially, unless redistributed, the capital obtained from these ventures will be built upon years of racial oppression. In 2019, a legalization measure New York failed because it did not affect issues of social equity.

“I applaud New York for stalling cannabis legalization the first time because it didn’t do enough for social justice.”

In contrast, as California has charged ahead with legalization, there have been controversies and criticisms surrounding the social equity programs that have accompanied this surge. In Los Angeles, the Social Equity Owners & Workers Association has argued that the program contains too many loopholes and is ineffective in achieving its aims.

“In Los Angeles, our social equity program for cannabis is an absolute disaster. There is an issue of capitalists coming and trying to buy Social Equity Licenses from people who don’t have the funds to start their own ventures because the entry costs are so high.”

Eizen emphasizes that cannabis companies and brands need to do more.

“The best thing companies can do is open their purses and get budgets to people who are queer or Black. They have the capital to buy these licenses, and they really need to be giving back to the community. It’s not just about posting on social media or hiring diverse models; it is about who is sitting on these boards and who owns these companies.”

Performative activism remains an issue in the industry, especially when Black Lives Matter and Pride are co-opted for commodified ends but are not backed by real action. The LGBTQ community was instrumental in the legalization movement and, as a queer artist herself, Eizen emphasizes the importance of acknowledging this.

“The fact is, we wouldn’t have medical cannabis if it wasn’t for the LGBTQ community. We need to remember that Black trans women are the backbone of the movement. ”

Eizen encourages queer artists and other entrepreneurs interested in the industry to approach it with compassion and passion, rather than for monetary gain.

“Keep putting yourself out there, you know, there’s always a lane for everybody. Make sure you are doing it for the right reasons — don’t approach the space with greed. Focus on building a foundation and connecting with the community.”

Kaleidoscopic, swanky, progressive, and tinged with the esoteric, Eizen’s art captivates because it arises from a place of awareness and compassion. With work that exhibits infinite dimensions and hues of color and softness, Eizen is both a creative dynamo and an ardent advocate, our very own lush and just queen of kush.

This interview is in our current Lil Wayne 420 print edition. Buy here! 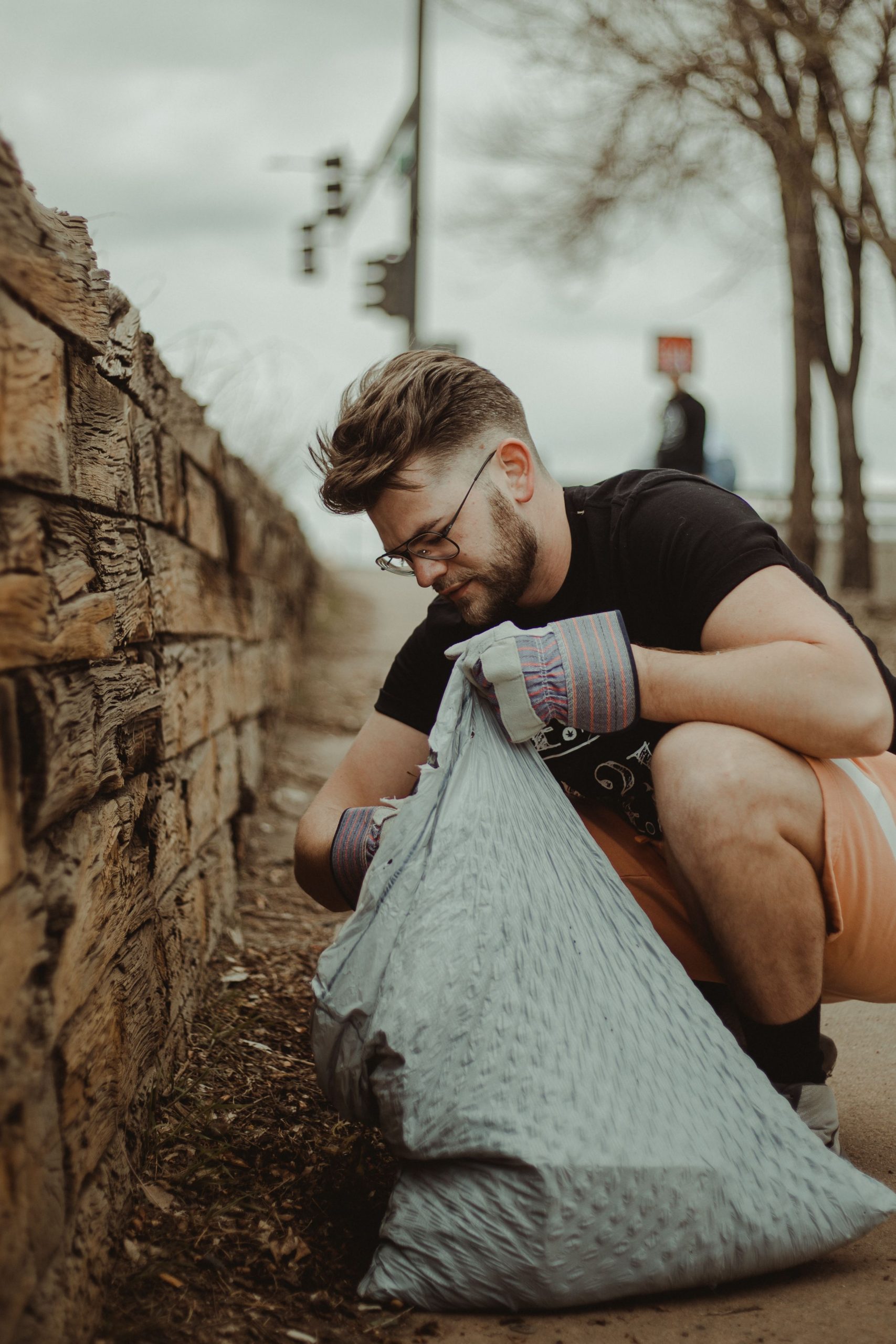 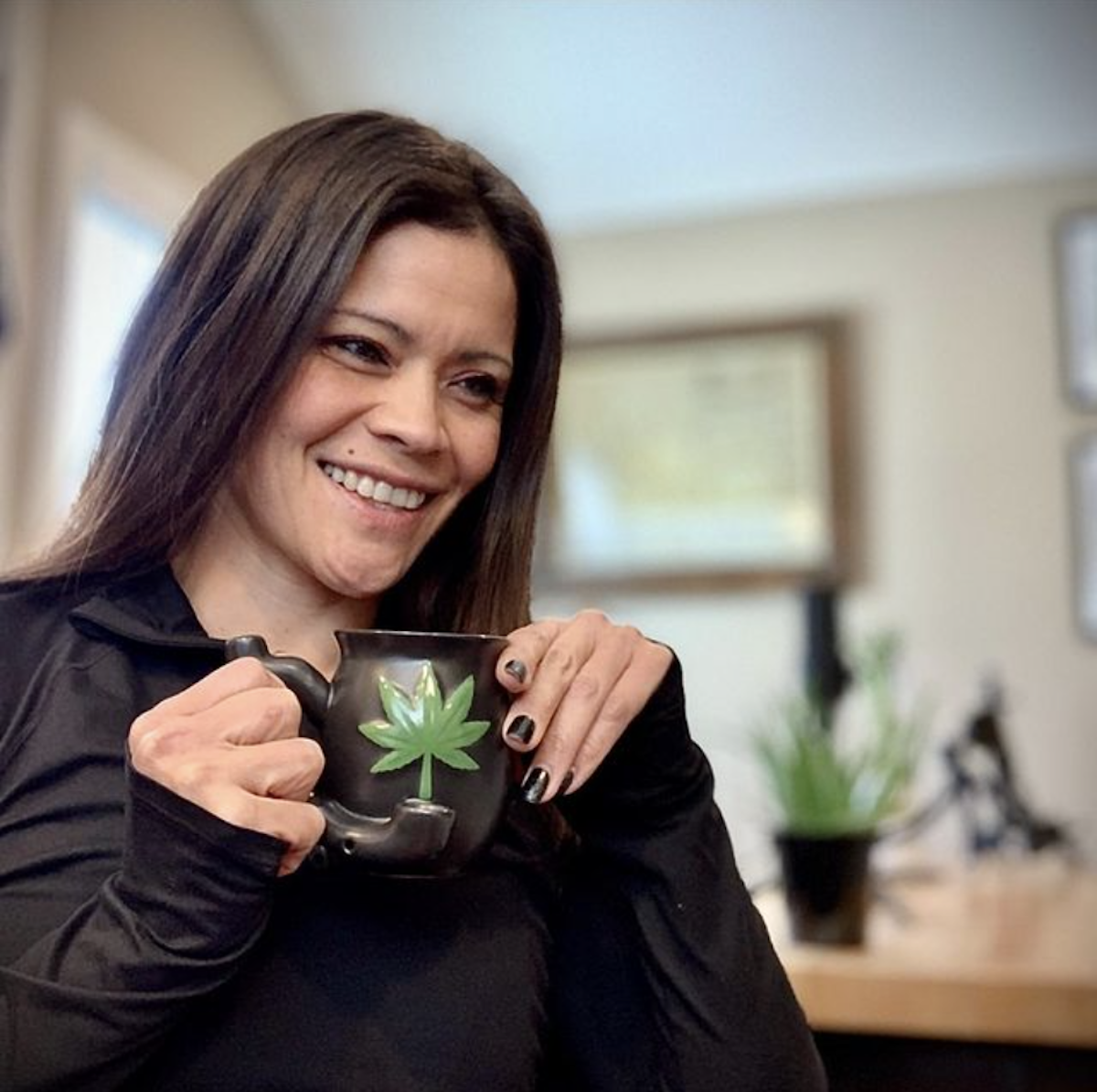