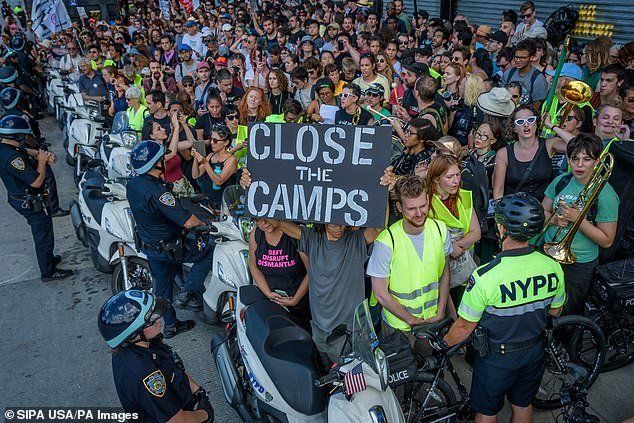 The not-unfamiliar chant grew in volume with each repetition: “No ICE! No KKK! No fascist USA!” I had first heard this cry at the Women’s March in D.C. in 2017 (although that iteration of the chant included Trump’s name). I was actually on a bike ride from Morningside Heights to Battery Park in Manhattan when I noticed cyclists and pedestrians alike had stopped in their tracks completely outside Pier 66 on 26th Street and faced eastward, where there were at least four police vans and dozens of protesters. Signs read: “Close the camps,” “No human is illegal,” “Abolish ICE” and the like. Although the event was created in July, the protest comes just days after President Trump announced his support for a background check bill, which would also include heavy immigration restrictions. As such, the timing of this demonstration was fitting.

Several people had already been arrested, and stood idly in handcuffs as police officers processed them before escorting them into their vehicles. Just 30 minutes earlier, protesters had stopped traffic completely by linking arms and sitting in on the West Side Highway, blocking traffic in both directions between 22nd Street and the 40s. A video recording of the sit-in indicates that police alerted protesters they would be arrested and charged with disorderly conduct if they did not get out of the roadway. According to recent reports, around 100 people were arrested over the course of the protest.

A Facebook event hosted by Cosecha NYC—titled #DignityNotDetention: Close the Camps—called for an organized protest in Madison Square Park. The event page states that their goal was “to DEMAND an end to concentration camps on the ‘border’ and ICE’s reign of terror in our communities.” According to their website, Cosecha NYC is a “non-violent movement fighting for permanent protection, dignity, and respect for the 11 million undocumented immigrants in the United States.” The itinerary uploaded to Cosecha NYC’s Facebook page indicated a march to an “undisclosed location” where “direct action” would be taken at 1 PM, and closing chants would occur at 2 PM. As of now, it is unclear whether the final location was meant to be at 26th Street, and if the arrests that occurred there were related to the protest that originated in Madison Square Park.

On my way back uptown, about an hour and a half later, I passed by another protest—this time for democracy in Hong Kong, which is facing a series of police crackdowns as protesters demonstrate against a new extradition bill that would allow arrests in Hong Kong to be extradited to mainland China. The protest was entirely conducted in Chinese, so I was unable to get any further details from afar. By the time I made my way back up to 26th Street, the anti-ICE protesters were gone. As one bystander put it, “That’s New York.”