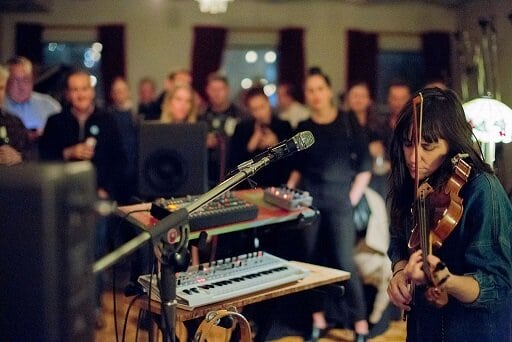 Afterglow, “Pro Audio’s premiere recording industry after party,” is an annual celebration for music industry insiders that takes place during the Audio Engineering Society’s (AES) international conference. This year marked the milestone tenth anniversary of the popular shindig, which has hosts exclusive demo sessions and performances for the world’s most prestigious producers, engineers, and mixers working today at renowned studio spaces in New York, Los Angeles, and San Francisco. Its landmark decade was capped off, not only by taking place at New York’s legendary Sear Sound (where artists such as David Bowie, Lenny Kravitz, and Yoko Ono have recorded through the years), but by adding a new dimension to aural production as we know it. For the first time in music history, a live performance was recorded in quadraphonic sound!

Quadraphonic sound, as Shovlin explained, is a process that uses four channels in which speakers are positioned at the four corners of a room, reproducing signals that are independent of each other. This is more or less “surround sound,” and was pioneered in the 1970s but found too expensive to be successful at the time. It had only ever been used to reproduce existing audio tracks to vinyl records. But when Emily Wells took the stage at Sear Sound, her voice went directly from body to vinyl through the magic of a quadraphonic setup, creating a moment in time that audio engineers will be studying for generations to come.

Honeysuckle correspondent Frankie Beatrice sat down with Shovlin and Wells in the midst of their breakthrough event to talk musical influences, the love of the job, and much more.